Browse the web privately as it was meant to be

Today we will talk about Windscribe, the company is registered in Canada, which is part of the 5 eyes alliance, known for mass surveillance of its citizens, from which we conclude that Canada is not the best country to register a VPN company. But immediately we will overcome this minus by a plus, namely the maintenance of a no-logging policy, so even if the government or other structures take over the servers or they have a warrant for the information, the service can not help them anything, because all your online activities are not recorded and are not stored on the servers.

Windscribe has a big server network spread over 63 countries, strong military-grade encryption to keep you anonymous on the web, and a big arsenal of advanced security features like ad blockers, split tunneling, kill switch, dedicated servers for geo-blocking Windflix. Windscribe uses protocols IKEv2, WireGuard, OpenVPN (UDP, TCP), Stealth, Websocket Stealth. Now we will examine in detail all the features of the service, what makes it stand out from the rest, and the disadvantages, so you can decide for yourself whether Windscribe fits your needs and requirements.

Windscribe uses encryption that is now hard to imagine a reliable VPN without, AES 256. This high-security level of your data is complemented by RSA 4096 key and SHA 512 authentication, thanks to these parameters you do not have to worry that third parties or ISP can decrypt the channel between the VPN client and the server tracking your browsing activity, thus Windscribe justifies its claim that your digital identity is anonymous.

We already know the well-proven OpenVPN, Wireguard, IKEv2 protocols, which are considered one of the most reliable and provide an excellent balance of speed and security, but here we also meet such protocols as Stealth and Websocket Stealth. Stealth protocol is also a reliable and stable protocol using Stunnel - a proxy designed to add TLS encryption functionality without changes in the code of the programs, it is an open-source algorithm that protects your web traffic. Websocket Stealth - a communication protocol over TCP connection that protects the web server and the browser. The combination of such strong encryption and such secure protocols gives you the ability to connect to public wifi networks without worrying that you will have a data leak or that someone can interfere in your private virtual life by watching you, hence your privacy is under a strong lock of service. 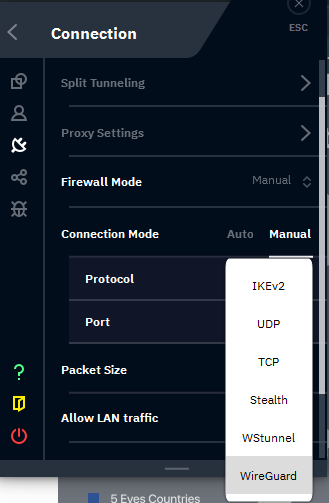 Windscribe VPN is registered in Canada, a country which is part of the 5 eyes alliance, this cooperation involves intelligence sharing, but recently thanks to Edward Snowden and several articles there is evidence of mass surveillance of its citizens, but Canada is also known for free and unlimited internet access, values free speech, and the government maintains its net neutrality.

If the government does manage to legally demand user data, Windscribe can't help them because it doesn't track your Internet traffic, your IP when you connect or store your data on its servers, so having a non-logging policy is a sign of trust regarding your privacy.

Now let's consider one of the important criteria when choosing a VPN service, which is the speed because if the VPN service will significantly slow down your speed, at which it will not be possible to view the content, it is unlikely that you will use it.

The stability of the speeds was not the highest compared to other premium VPN services, but it was satisfactory for watching video content in Full HD, without buffering, as well as satisfactory for downloading torrents. It is also worth noting the dedicated server Windflix, specially designed to open access to Netflix USA, when connecting to this server, the speed was slightly higher.

What makes Windscribe different from other VPN services on the market is the additional features such as ad blocker, malicious trackers, software called R.O.B.E.R.T. With R.O.B.E.R.T. you find the debugging function, all the domain requests are displayed thereafter you go into the debugging section you have three choices: blocked, resolved, forged and then start debugging, if you have applied the blocking in the domain settings, in the blacklist settings R.O.B.E.R.T looks at what rules for this domain and then fakes a response, your browser will no longer be able to connect to the IP address as blocking is forced. Also, you can add a domain to the white list, R.O.B.E.R.T. proxies a DNS query and resolves the domain from authoritative servers, and downloads the content, a very handy feature and is a distinctive feature of the service.

The split tunneling feature is a feature that allows you to use a Virtual Private Network (VPN) at the same time to transmit data anonymously and use a public network if the situation does not require encryption of your data. in other words you have a choice which part of the traffic gets direct access to the internet and which part needs to be securely masked.

When you have an outage in your VPN connection, your data becomes vulnerable at that moment, this leak can be exploited by hackers, and here comes the Emergency Disconnect feature, which when your VPN connection breaks, interrupts your Internet connection, thereby preventing a leak of your confidential information, plus there is port forwarding to help you enable the torrent client web interface, home security camera, Plex server, NAS.

The Windscribe app is well optimized, well thought out, and easy to start using even for a new user, just create an account, choose a paid or free plan, and download the app you need, if you have any questions, there are installation instructions on the web site. 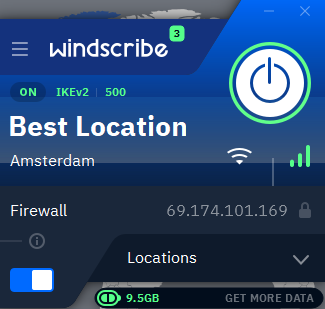 Windscribe has a large server network in more than 63 countries and 110 cities, because the more locations available, the more likely to connect to the nearest location to ensure high speed, by the way, all the servers in Windscribe are physical, so you can access all the power of the server, because the equipment is real.

If you choose the free plan, you will be able to connect to the VPN in 10 countries: USA, Canada, UK, Hong Kong, France, Germany, Netherlands, Switzerland, Norway and Romania.

Let's see how Windscribe handled opening access to streaming platforms. Lately, famous streaming platforms like Netflix, Amazon Prime Video, Hulu, BBC iPlayer, Kodi have learned to detect VPN traffic and immediately block it because the content is geographically limited by different countries. Fortunately, Windscribe has a dedicated server Windflix to bypass geographical blocking, when you use it you will have access to Netflix USA, but in all countries, Windflix works consistently and does not always open access to content, for example when using a server in Britain I encountered some difficulties. When opening access to Hulu, Kodi there were no problems at all and I started surfing content I was interested in on these platforms.

Unfortunately, it wasn't possible to access streaming services such as Amazon Prime Video, BBC iPlayer, ESPN, and HBO, which is a minus, of course. What was surprising was that Windscribe managed to bypass the blocking of the great Chinese firewall

Windscribe is good enough for torrents, not all servers can exchange files via P2P, but it is convenient to use the program to warn you about it and show you which servers support P2P.

Windscribe has apps for Windows, macOS, Linux, Android, iOS, Fire TV, Huawei, Routers, and extensions for Chrome and Firefox. In desktop apps, you'll have features like a firewall that blocks anything outside the encrypted tunnel that can leak your information, IKEv2, OpenVPN UDP, TCP or Stealth protocols, split tunneling, an emergency switch, autopilot for quick connection, ad and malware blocker, and other features to ensure your anonymity and privacy.

Browser extensions have all of the above security features in their arsenal without exception.

You can also purchase VPN routers, and if you have them, Windscribe has a section with instructions on how to set up routers.

Windscrbe offers free and premium (paid) plans. How is the free plan different? You will be able to use only 10 countries, 10 GB of traffic, no dedicated Windflix servers and a number of other restrictions, including speed, and what I did not like was the 3 days refund policy, this is a very short time to understand whether the service is suitable for you or not because in the free version you can not use the whole arsenal of features. Let's look at paid plans, there are two of them

You can pay for your subscription in bitcoins, credit cards, PayPal, Paymentwall.

Windscribe support is available 24/7 in the online chat, you can also ask for help via email, and there is a chatbot Harry who will give you answers to your questions, but if you start to ask Harry complicated technical or other questions, Harry will not cope with them, so the chat bot is only suitable for general questions.

The site has a knowledge base, if you suddenly want to understand the operation of the same R.O.B.E.R.T. or other functions of the service, a section with frequently asked questions and a blog, which contains a large number of useful articles.

Also worth mentioning is an application setup guide in case you encounter any difficulties with the installation.

✘ Registered in Canada, which is part of the Five Eyes Alliance
✘ Access to many streaming platforms is limited
✘ 3-day money-back guarantee