Powered by 15 years of expertise

In this review, we will talk about a VPN service called CyberGhost.

CyberGhost was founded in 2011 in Bucharest, Romania, and since 2017 it belongs to Kape Technologies (formerly called Crossrider), a cybersecurity company.

The foundation of great organizations is built first and foremost on trust and CyberGhost and the fact that the service provides anonymity to 36 million users around the world makes it clear that people trust the service.

Let's find out what has caused this trust among VPN service users, let's test the speed when using VPN, what will be the performance at famous streaming sites, understand the many security features, such as killswitch, hiding your IP address, no logging policy, reliable 256-bit encryption using OpenVPN (TCP or UDP), IKEv2, WireGuard, L2TP / IPSec. They also offer split tunneling for convenience and a SOCKS5 proxy server for torrent enthusiasts. All these features are a guarantee of your privacy in the virtual world. It is worth mentioning that CyberGhost since 2011 keeps the transparency report - the report with the information about the requests from the police, private persons, and other organizations to disclose the volume of the user's personal data, taking into account the loyal jurisdiction of the company and the main principle about protecting the rights and ensuring privacy, CyberGhost cannot provide the user data, but even if the police or other persons make a search with the seizure of user data, they simply will not find anything, as the service does not keep any records about its users, this report is publicly available and the company has nothing to hide, the report publishes the name of the country number of DMCAs, number of police requests, number of malicious activity, the report has been conducted since 2011 to date every 3 months.

First, let's look at how the service handles the security and privacy of your digital identity. CyberGhost uses one of the most secure algorithms, AES encryption with a key length of 256 bit, the strongest encryption to date, used by banks, the U.S. government, and other entities marked "top secret.

The connection between the client and the service is also via RSA4096 with SHA384 hash authentication and ECDH key negotiation protocol which is the strongest protection for your traffic and serves as a strong digital safe for your data that will take forever to decrypt.

Protection against publicly available Wi-Fi networks, through which cybercriminals can easily steal your data.

There is also a dedicated IP address, which is assigned exclusively to your account, with which you continue your online activities with the same security, but plus you exercise control over your online reputation, to use it or not, it already depends on your needs, the fact is that it's available.

CyberGhost since 2017 belongs to Kape Technologies (a company engaged in cybersecurity), which raises many questions among users because the company used to be called Crossridder and was associated with the distribution of adware through infected software packages. The headquarters of Kape Technologies is in London. As we know the UK is part of the Five Eyes alliance that has an agreement on cooperation in the exchange of intelligence including, but CyberGhost is registered in Romania and operates following Romanian legislation, and this country is known for its strict jurisdiction regarding the protection of users' privacy rights.

CyberGhost has a zero-logging policy, this means that your online activity, downloads, movie views, visited websites are not saved on the servers of the service, your activities are not recorded and not given to third parties, even if the interested parties will manage to take over the servers, they will not find any information about you. The service must have built-in protection from leakage IPv4/IPv6 DNS, as well as WebRTC, which guarantees you anonymous surfing and activity on the Internet, they have their DNS servers for this, and if the requests will come on IPv6, they immediately blocked and make invisible your IP address. It is worth mentioning that CyberGhost will need your name, email address, and payment information to administer your account, but this information does not in any way compromise your anonymity.

The speed of your connection through VPN service is affected by several factors, the distance to the server to which you connect, respectively, the further geographically the server is located from you, the slower will be the speed, the load of the server itself, how many users use the server and VPN protocols simultaneously. CyberGhost has the most massive server network (number of servers 7100+), which covers 91 countries, which gives you a great opportunity to choose a server near you so it won't be overloaded at the same time, and all this is done with the help of fast OpenVPN and IKEv2 protocols as well as the best speed and security balance of WireGuard protocol.

But during the test, we can see that it's not one of the fastest VPN services on the market today, but this speed is enough for streaming and downloading torrent files, here I can recommend you to use the Best Server Location function, and really the results are improved after using it, it helps you to find the best servers by such criteria as latency, speed, and distance.

Let's consider what features make CyberGhost different from the others and what its advantages are.

The first feature worth paying attention to and what makes CyberGhost stand out from the rest is of course the No Spy server feature. To begin with, let's note that the server is located in Romania, which makes it out of reach of the Five Eyes alliance, as well as Fourteen Eyes, our anonymity is increased, the performance of servers for torrents is improved, great bandwidth. The Kill Switch feature is very useful when you have a break in your VPN connection, at which point your data becomes vulnerable and the Kill Switch immediately terminates your connection to the Internet, preventing data leakage.

We also have a split tunneling feature that allows you to share files, watch videos under VPN encryption while still being able to enjoy local content. Sadly though, split tunneling is not available in macOS, iOS, and Linux apps.

There is a TOR compatibility feature, which further enhances our security when surfing the Internet, especially useful in countries with strict censorship.

CyberGhost offers in addition to that malware and ad blocking, which is also additional protection for your data, unfortunately not all ads are blocked, including Youtube videos, but the protection against malicious sites is provided at a good level, so in the end, it's not a bad addition to the arsenal of basic features. The CyberGhost VPN application is intuitive and easy to use, I like the color selection solution, especially at night it is relevant, there are many sections with information you are interested in and it will not be difficult to find even for beginners. 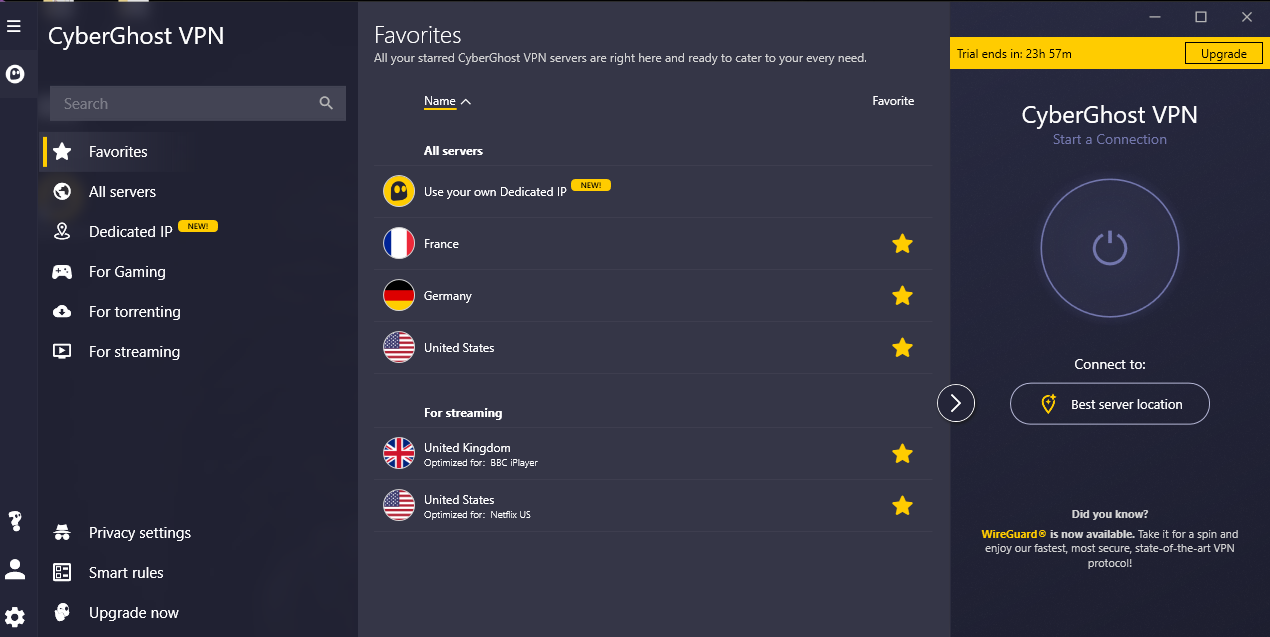 CyberGhost VPN currently has over 113 VPN server locations and is available almost all over the world (number of countries 91), this is a huge coverage compared to other VPN services, given this fact, we are more likely to find a non-crowded server nearby to transmit a good streaming speed.

Unlocking Netflix, everyone's famous streaming media giant delivering movies and shows has its limitations geographically and Netflix libraries vary from country to country and there are many unhappy with content that is not available to them in their country. This is where CyberGhost comes to the rescue, so how? Netflix starts thinking that you are in a completely different country, accordingly, you can access the library of the country whose server you are connected to, CyberGhost redirects your connection through their own private networks and you have full access and they reliably handle bypassing Netflix proxy detectors.

The service also successfully unlocks BBC iPlayer, Disney+, Prime Video, HBO Max, and other well-known platforms. If there are fans of Sky TV or DAZN, then this service is not for you, unfortunately, CyberGhost can not unlock them.

The quality of the speed remains at the proper level, videos can be viewed safely in Full HD without buffering, thanks to the bandwidth without restrictions and a global network of streaming servers around the world.

CyberGhost has specially optimized servers for P2P/Torrents, and the privacy is preserved while downloading torrent files and downloading speed is not reduced

Of the minuses, it's worth noting that the service does not work in countries with strict censorship, such as China, UAE, it's also banned in Turkey and Saudi Arabia. 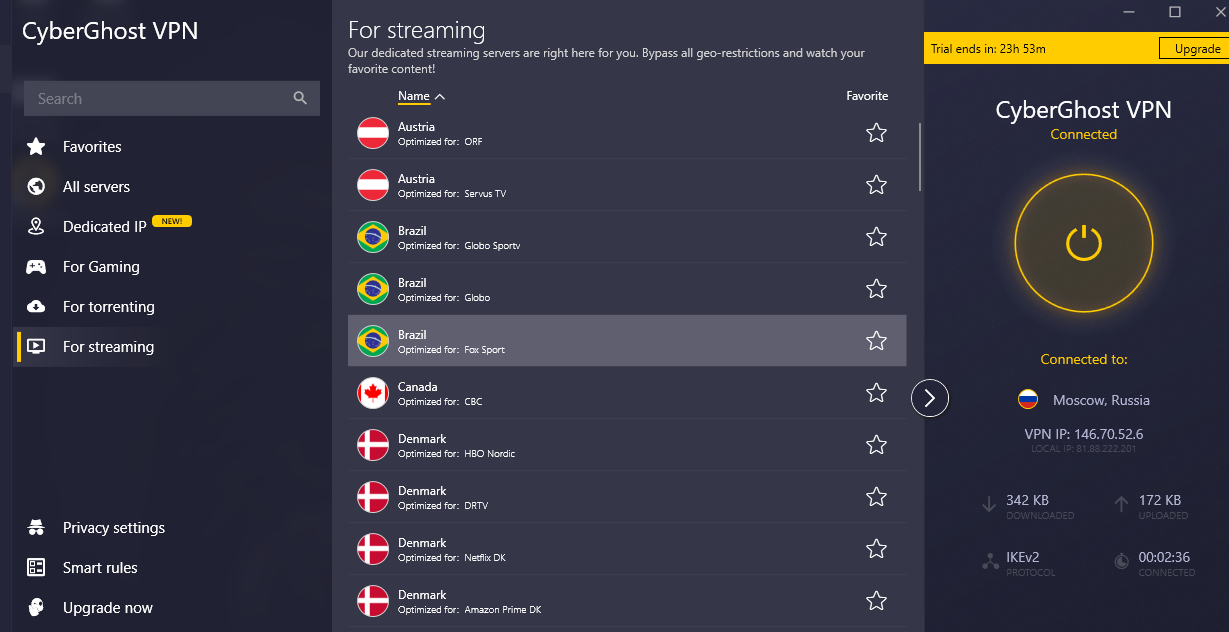 CyberGhost is generally available for Windows, Linux, there are apps for Android and iOS, also browser extensions for Chrome and Firefox. Plus in addition, the service offers us apps for TV (Amazon Firestick, Android TV, Apple TV, VPN for Smart TV), and for game consoles (Xbox Series X, One & 360, PlayStation 4 & 5)

The Android and iOS apps are pretty much the same, the only difference is that the iOS app doesn't have separate tunneling and ad and malware blocker, but compared to many other services, the Kill Switch feature is available in the app.

The Chrome and Firefox browser extensions will only protect you when you use the browser, but there are limitations, such as the Kill Switch.

You can connect up to 7 devices at the same time and among other services, this is quite a lot and there is no loss of performance.

If you buy a subscription for a long period, the offer will be very cheap and fully justify the price-quality ratio. It's worth noting the money-back guarantee if you're not satisfied with the service for whatever reason, and the guarantee is longer than the others, 45 days! There is an opportunity to buy a free 1-day trial, but to be honest, for such a period of time you're unlikely to be able to fully test the service. Consider the different plans.

You can pay for your subscription using Credit / Debit cards, Paypal, and Bitcoins (if you want to use the anonymous payment method without providing the information).

CyberGhost offers an around-the-clock chat room, where you can ask a question to a specialist on the subject you are interested in, or if you have problems with the service to your friend. It should be noted that the support service answers quickly enough, tactfully and on the topic, this is undoubtedly a plus. You can also contact the support service through the mail by filling out a form and asking the question you need.

Very pleased with navigation in the frequently asked questions, it's easy and convenient, you can find the guide to configuring your device to CyberGhost, in the Help Center is a lot of useful information, but if the newcomers can not figure it out, you can always ask for help from the service and you quickly offered a solution to your interest you the problem or question.