In this review, we will talk about Surfshark. The company started its activity in 2018 and in a relatively short period of time has managed to gain the trust of users from all over the world. Let's consider what distinguishes Surfshark from other VPN services, what it can offer from the arsenal of its features, and whether the price for the services provided will be appropriate. We want to find out if the company lives up to its name and is indeed a shark in the digital ocean of privacy among other VPN services.

What is credible is the independent audits from CURE53 (a German cybersecurity firm), the evidence of the "canary" is the report on warrants from the government for disclosure, unlimited number of devices to connect, a wide range of functionality, which we will consider in detail, use of a server network with the only RAM and of course the reliable 256-bit military-grade encryption. Let's test their performance and speed, how it copes with unblocking popular streaming platforms, and most importantly, whether it provides reliable protection for personal data in the digital world.

Surfshark uses the most secure encryption standard to date, AES 256 bits, which even one of the most powerful supercomputers in the world (Sunway TaihuLight) will take about 800 quadrillion years to decrypt, which is why it is used by many governments, as well as banks and other institutions that require to keep their data a key secret.

Sometimes a password is not enough to secure your account and this is where two-factor authentication comes in, which will serve as an additional shield to your account access, it consists of using two different types of authentication, which makes it incredibly difficult for cybercriminals to hack you.

To establish a secure connection between the VPN client and the VPN network, we will look at of course what protocols the service offers us and what their speed, security, and performance are. Surfshark offers us one of the most popular and reliable VPN protocols, OpenVPN, we also have IKEv2, WireGuard - a great new addition to the protocols, which uses modern cryptography algorithms, provides us with lightning-fast speeds and it is completely transparent since it has open-source code. And the last protocol in the list, but not the most important, is the protocol Shadowsocks - it is great for people who live or sometimes are in countries with strict restrictive censorship (China, UAE, Egypt, etc.) But it should be noted that it encrypts only your browser traffic, not the entire device.

We also have Camouflage mode in the app, which helps hide the very fact that you are using a VPN. Plus, Surfshark never collects and stores your personal data, IP address, which greatly increases the level of your anonymity. 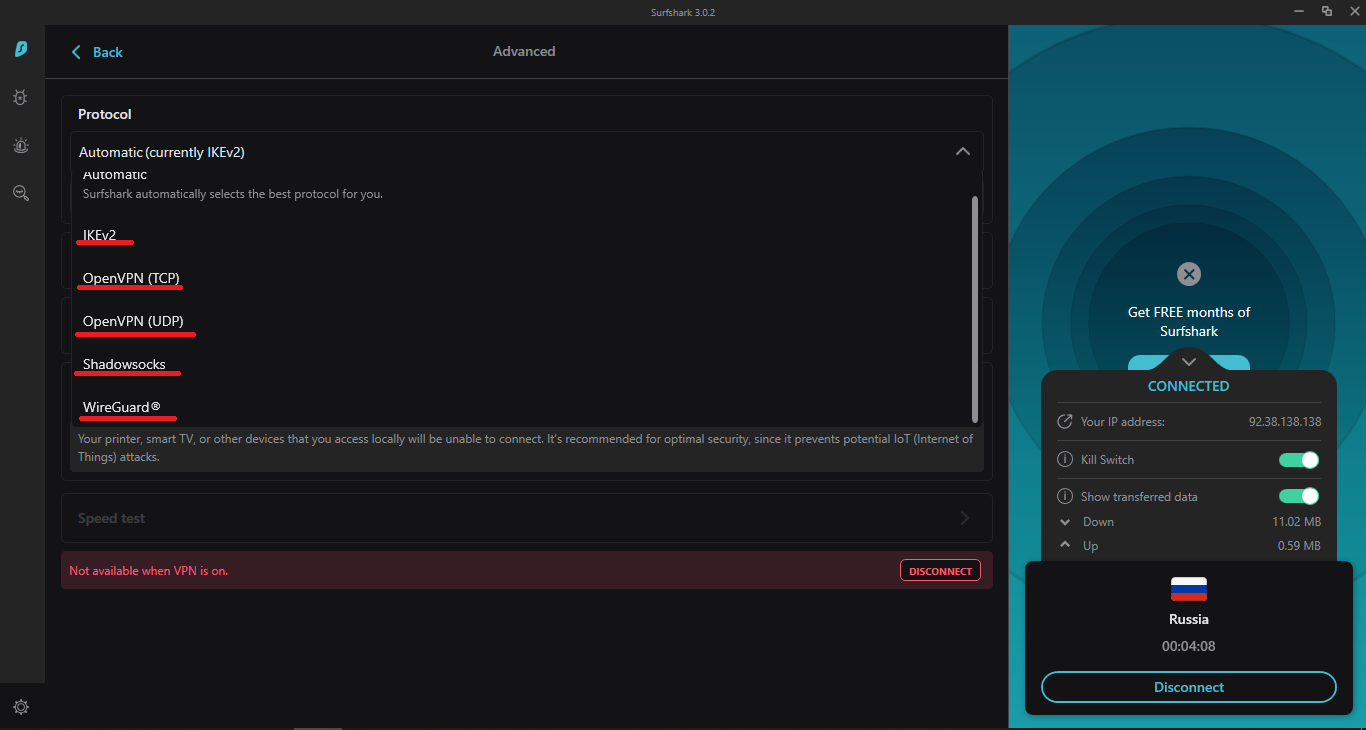 Surfshark is registered in the British Virgin Islands, known for its data protection regime, common law obligation of privacy and confidentiality. The company's transparency report, which publishes requests for data disclosure is also a big reason to trust the service, also because the company has not received orders to disclose information, many services also claim not to receive such orders, but for some reason do not publish it in the transparency report, which may raise questions, in the modern world people are used to believing facts, not just words.

The company adheres to a strict policy of no logging, which means that your traffic is not monitored, not recorded and not stored on the company's servers, which means that even if a situation happens, after which the service is obliged to provide data to the interested structures, whether it is a crime or something else, it is first unlikely that the service will provide data, given the jurisdiction of the country where the company is registered, and second, there actually will be nothing to show.

The company conducted its first independent audit in 2018, conducted by CURE 53 (a German cybersecurity company, which deals with customer-side security studies), and passed it successfully, which is a confirmation of the statement of the very reliable security and protection against leaks of your data.

Now let's talk about an important criterion for evaluating VPN service, such as performance, otherwise, there is no point in using a VPN service that provides you with reliable features to ensure the anonymity of your identity, but work, surfing websites, watching shows, and movies becomes unbearable because of the great loss of speed.

Surshark, in comparison to other premium VPN services, has a massive server network (198 VPN servers in 67 countries), which provides a decent smooth operation with very fast speeds. True, not all of them are physical, there are virtual servers, but especially this does not affect anything, you get of course a local IP, but physically the server will be located in another country.

As usual, we will test the speed without VPN service, connect to the recommended, as well as the most remote, for example, to unblock the streaming platform.

According to the test results, we can make sure that the high performance of the service, that the servers are running smoothly, we have not had any buffering on the most remote servers to view the American library Netflix. Fans of online games can breathe a sigh of relief, as Surfshark demonstrated quite fast connections to the servers.

Of course, a big role is played by the location of the server, the closer it is to you, the faster the speed of streaming information, and using the "Nearest Country" and "Fastest Server" functions, I almost did not notice a decrease in speed, it was at most 15 percent.

In this section, we will take a look at the features of Surfshark that provide users with safe surfing on the Internet, ensure your digital anonymity, understand the features and find out what makes Surfshark different from other VPN services.

The Killswitch feature is a very important feature when your VPN connection gets interrupted for some reason. Killswitch will automatically disconnect your device, making it impossible for your IP address and personal information to be leaked.

The MultiHop function is connecting to the network through two different servers, thus your IP address is reliably masked and there is almost no chance to detect it, which is additional protection for your privacy in the digital world and stands out among the features of other services.

Whitelister is IP addresses, email addresses, applications approved by the administrator, what is it for? This is done to protect your private network and devices from external attacks and only the objects on this list will have access to the system.

Override GPS - you may have noticed if Uber requests your location and you are not constantly being tracked, if you are tired of being tracked you can use this feature, select a server and it will assign you the location to that server.

If you want to enjoy surfing the Internet without ads, and to protect yourself from malware, under VPN Features enable the Clean Web feature.

A split tunneling feature that allows you to share files, watch videos under VPN encryption and lets you choose which traffic goes through the VPN.

The app looks really good and very simple, there is a dark mode, it is not particularly difficult for a beginner to understand how the app works, for this there is even a brief description under each option. In general, I like the design and the user interface of the applications on different platforms, they are almost all the same, easy to use, and intuitively understand. 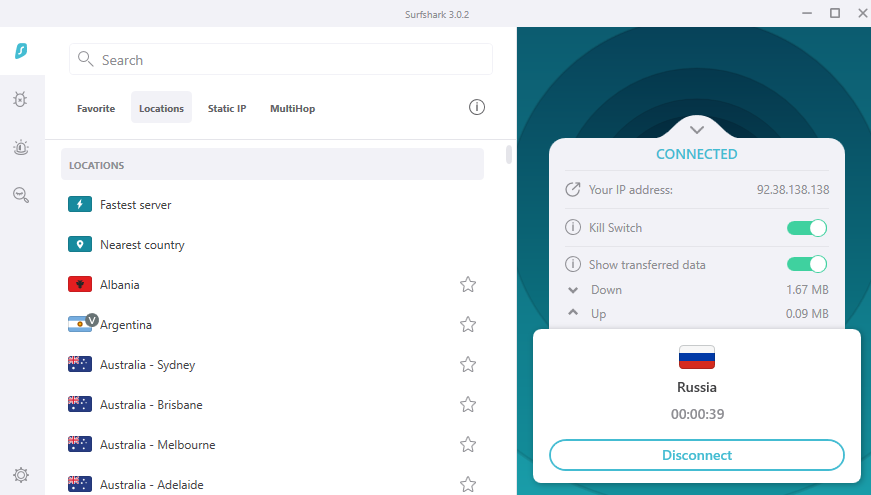 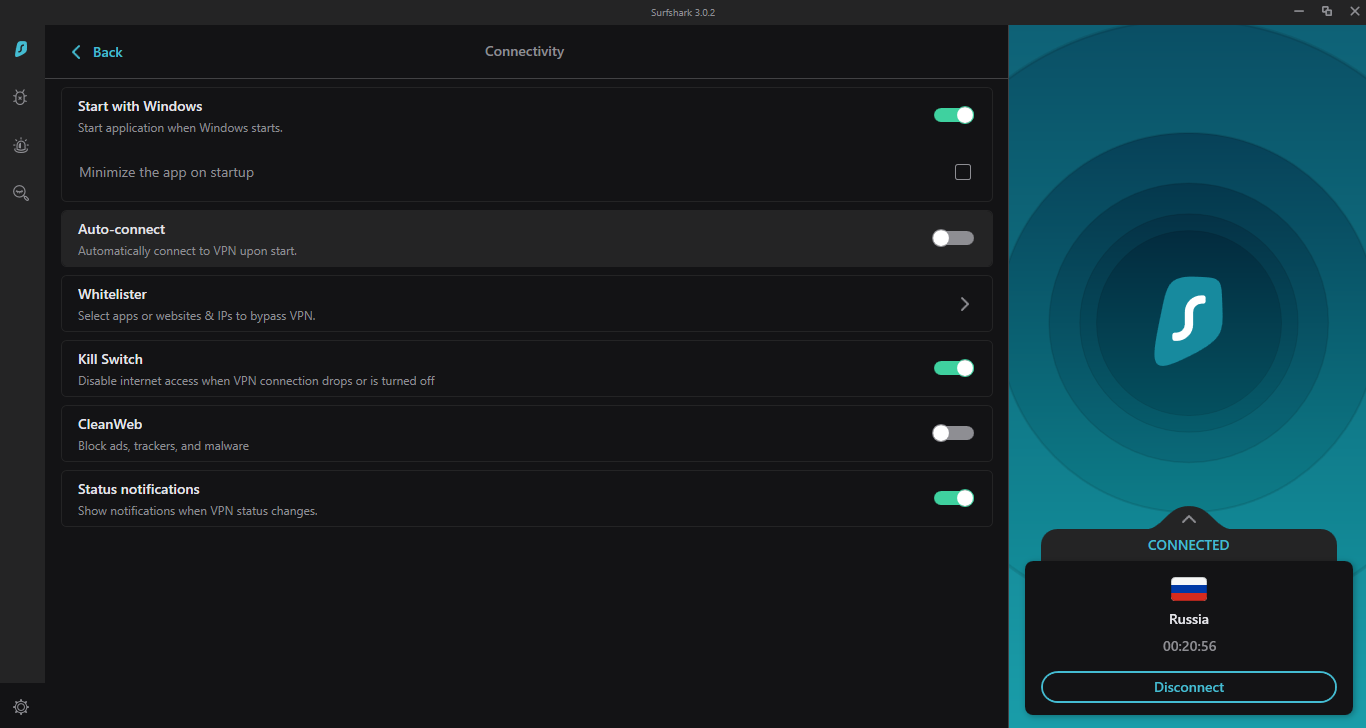 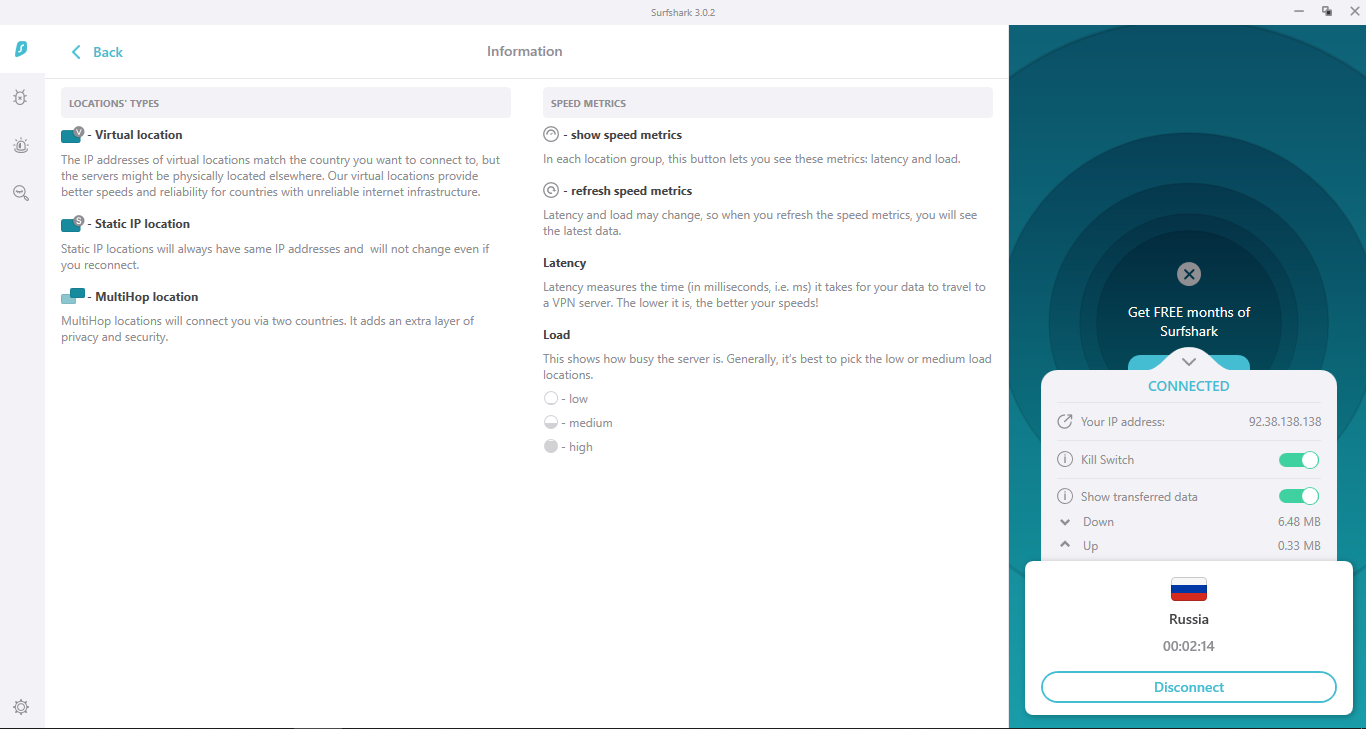 Surfshark has a great server network compared to other VPN services (198 VPN servers in 67 countries). Server networks are used only with RAM, which is an absolute advantage of the service. Not all Surshark servers are physical, some regions use virtual servers, in fact, nothing changes, just the actual server will be located in another country, only the language may change depending on the location of the physical. Each server has a private DNS service.

This is an important section for fans of movies and TV shows. Here we will look at how Surfshark handles the geographical blocking of content from popular streaming platforms.

The most popular streaming platform is Netflix. We had no problem connecting to Netflix USA and the video quality was flawless, we also gained access by connecting to servers in the UK, Singapore, and almost 90 percent of the EU, the video played perfectly, but in other countries, there were problems with access to Netflix.

We also have an opportunity to connect to P2P servers, it is worth noting that all Surfshark servers support this protocol, but all are quite optimized, the speed of torrents was on top, which corresponds to the high speeds of downloading torrents declared by the company, but I chose P2P servers manually, because the automatic connection decreased the speed significantly, as I advise you.

Next, we have the popular UK streaming platform BBC Player. Surfshark easily managed to open access to BBC iPlayer, which positions Surshark as an excellent service that decently handles streaming without losing speed. Streaming fortresses such as Hulu, Amazon Prime Video, and others were also not without difficulty taken, though not all of the servers opened access to Amazon Prime. Fans of Desney+ this service is exactly for you because it easily bypassed site blocking on geographical principles and you can enjoy watching their library from almost any server at a sufficiently high streaming speed without buffering.

We continue the review and move on to device compatibility. The first thing worth noting about Surfshark is the unlimited number of connected devices, which makes it head and shoulders above the rest and is my favorite feature of the service.

Surfshark works on platforms like Android, iOS, Windows, macOS, Linux, Amazon Fire TV and others. You won't have to re-adapt to the app on other devices and operating systems because Surfshark apps are the same everywhere, on your phone, on your tablet, on your laptop, on your PC.

Everything is simple enough, even for beginners, with an intuitive and pleasant interface. It is worth reminding about fake GPS location on Android. if you feel like you are constantly being followed by companies like Uber, Facebook, Instagram and other popular apps and you want to manage your GPS location, then you should just go into the application and enable this useful feature. Surfshark is also compatible with the router, but you will have to install the client manually because there is no application, or you can contact the support service and they will explain to you how to do it correctly.

There are extensions for Chrome and Firefox and often forget to mention compatibility with PlayStation, Xbox, Apple TV, Smart TV, which is good news for users of these devices. 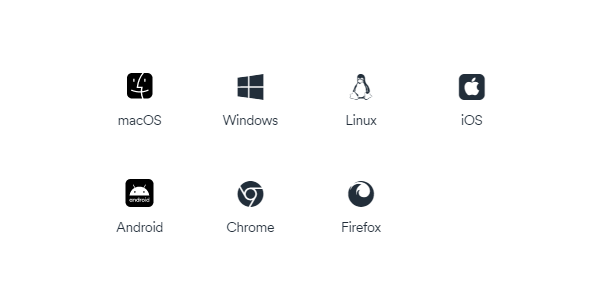 SurfShark services are a bit overpriced, but given their functionality, it provides anonymity to your digital identity and decent streaming speeds.

Also, they offer 30 days money-back guarantee, so you can test their service and decide if it suits your needs. 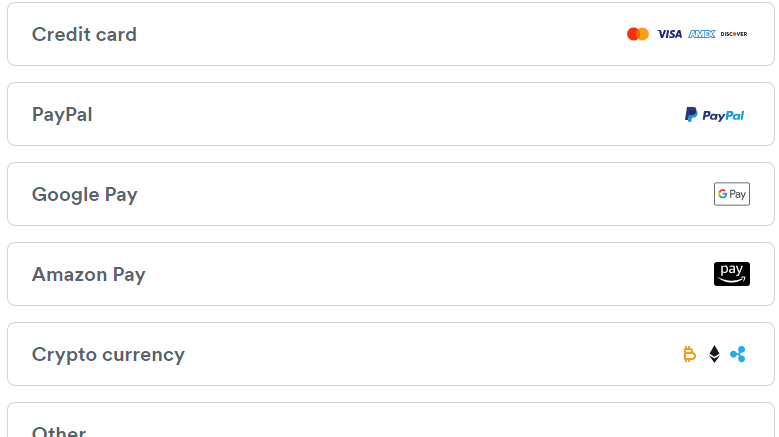 Support is available 24/7 through online chat, and you can also create a ticket or send an email. Employees are polite, offer instant solutions and answers to your questions, and by the way, you do not have to wait long for an answer, as well as the support of the Premium service, the answer is almost immediately. Also on the site, the service has an informative online help center where you can find various installation guides, and there is a section of FAQ (Frequently Asked Questions).

The response time via ticket is in the range of 2 to 6 hours which is quite acceptable and the most important is that the support is guided by the main principle of trust - honesty. When I had problems with the automatic connection to the P2P servers, the speed decreased and began to change the DNS servers, the consultant told me honestly that not all servers are sufficiently optimized and that it is better to choose them manually.