Today we have on the agenda a service that belongs to the Internet conglomerate Golden Frog, founded in 2010, Vypr VPN, a service registered in Switzerland. Very well established on the market among VPN providers due to its zero-logging policy, reliable encryption with modern algorithms that ensure anonymity and privacy of your digital identity. Service uses the well-known protocols OpenVPN, Wireguard, IKEv2 and its proprietary protocol Chameleon, among additional features will be available killswitch, Vypr DNS.

Vypr VPN has at its disposal 300 000 IP addresses, 73 VPN server locations in 64 countries. It's perfect for unblocking streaming services and supports P2P / torrents. In this review, we'll discuss the advantages and disadvantages of the service, check it for DNS leakage, IPv4, IPv6, WebRTC, as well as perform speed testing.

To understand this point, it is necessary to study the technical aspects of the service. So, Vypr VPN uses 256 - CBC encryption, without which it is difficult to imagine a secure and reliable VPN today, which would take forever to crack, HMAC SHA 256 authentication, and handshake with RSA 2048 keys, these characteristics indicate that the service is serious about security and privacy, and confirms its statement.

We tested it for DNS, IPv4, IPv6, WebRTC leaks. Our real location was in Russia, Vypr VPN successfully masked our address and no confidential information leaks were detected during the tests.

Vypr VPN is registered in Switzerland, which allows VPNs, the jurisdiction of the country is designed so that the government is serious about protecting freedom of speech, and is an advocate of free access to the Web, although Switzerland has allowed monitoring the online activity of its citizens, there is no precedent to believe that she uses it, anyway Vypr VPN has a zero-logging policy, that is not recorded and stored your information, time of connection without your consent, in the application you can unmark the storage of logs. Vypr VPN confirms its statement about zero-logging policy bypassing the first independent audit by Leviathan Security Group, the report of which says that the service doesn't log and there are no leaks of confidential information.

Now let's talk about speed because while using a VPN, the speed is reduced to such limits that it is impossible to surf the Internet, and movies turn into a slide show, the meaning of using a VPN? The speed of VPN depends on the server network, because the more servers, the more evenly distributed load on users, also depends on the geographical location, the closer the server, the faster your connection, the speed which is provided to you by your provider and other factors.

When testing Vypr VPN, at first I measured the speed without VPN application and it was 57.60 Mbps, then I connected to the recommended to me fast server, it was in Egypt and the speed was 27.99 Mbps, in percentage the speed has dropped by 50%, which is average, so I can not say if you are looking for a VPN provider with superfast speeds, that Vypr VPN for this. I also tested a server from the US, in this case, the speed was 11.90  Mbps, a result that disappointed me a bit, but at this speed, you can still view video content in normal quality and without lags.

Now we'll talk about the additional features the service provides. The service provides a cloud called VyprVPN Cloud, a useful feature, especially for those who use VPN for business, because you are given your own VPN server, in which you counter the entire stack.

There is an important Killswitch feature that ensures that our Internet activity is suspended if the encrypted connection is broken, minimizing the risk of data leakage.

Service has at its disposal Vypr DNS - this feature is designed to bypass geo-blocks that restrict content or deny access altogether, especially in countries with strict censorship, Vypr DNS through an encrypted tunnel bypasses these restrictions and gives you access to the resource, keeping your data confidential, because Vypr DNS does not keep any logs, it should be noted that Vypr DNS works only together with Vypr VPN. This feature is great for bypassing the Geo-blocking of famous streaming services, as well as it can bypass the great Chinese firewall. Another advantage is the NAT firewall, which hides your IP addresses by giving them all the same address, also the firewall blocks unauthorized traffic.

The application Vypr VPN is well thought out, has a nice user interface, equipped with all the necessary features, I personally missed the separate tunneling and ad blocker, there is a button for automatic connection, and also in the servers section you can sort them by speed to choose the fastest, the application is well optimized and works stably without failures. 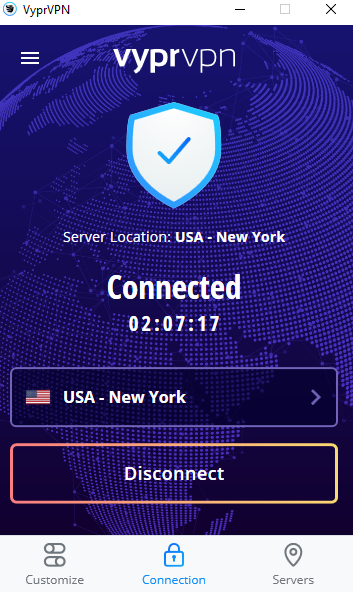 Compared to other VPN providers, Vypr VPN has an average server network represented in 64 countries, the number of servers at the moment more than 74, they are located around the world, more precisely in North America, South America, Europe, Asia, Africa and Oceania. There are 300,000 IP addresses available on the servers.

How good is Vypr VPN for streaming and torrenting?

Streaming services geographically restrict access to their content and immediately block access if they detect Vypr VPN traffic. With the help of VyprVPN I managed to bypass the geo-blocking and get access to the American library Netflix, I have not met the problems with obtaining access from streaming services such as Hulu, Disney+, Amazon Prime Video, HBO Go, ESPN +, DAZN and many other services, only when connecting to the BBC iPlayer I experienced temporary difficulties, which I managed to solve with the help of technical support. Thanks largely to Vypr DNS you can bypass any geo-blocks you might encounter, your connection will be secure and your logs will not be stored on the servers.

Also, Vypr VPN is good for torrenting, the service has support for P2P torrents, unlimited bandwidth and you can easily anonymously download torrent files, though speed will not be superfast.

What I liked, you can connect up to 30 devices at the same time, which is high among VPN services. Vypr VPN offers apps for Windows, Mac, Android, iOS, for TV, Routers, QNAP, Blackphone, Anonabox.

The Windows app has a full arsenal of additional features, including an emergency switch, ad blocker, Chameleon, Wireguard protocol, Vypr DNS, DNS leak protection and more, which I also liked. The Android app is well optimized, works stable, and has a killswitch function, Vypr DNS and protocols OpenVPN, Chameleon and WireGuard, the iOS app unfortunately does not have an emergency switch and uses IKEv2 and Wireguard protocols.

You can pay for the subscription by credit card, PayPal.

We are glad to inform you, that there is a 30-day money-back guarantee, so if you will change your mind about using our service for some reason, you can be sure that you will get your money back.

An important aspect when evaluating a VPN is customer service. Support Vypr VPN works 24/7, you can contact an employee through online chat, mail, as a rule, the answer does not have to wait long. On the site, you will find a section with frequently asked questions, application installation guides, the work of VPN in China, as well as guides on configuring routers and account management.

You can also find the answer you are looking for in the Blog section or you can formulate it yourself. In general Vypr VPN technical support works according to the premium service employees, fast, tactful, and most importantly instantly solve problems with the right solutions.