Today we are talking about a VPN provider called VPN Area. The service is registered in Bulgaria, which is not a member of any of the Data Sharing Alliances and is owned by Offshore Security LTD. VPN Area is located in 55 countries around the world, the server network is not as massive as that of premium VPN providers and has more than 120 servers. The service has a zero-logging policy. On the issue of security and privacy, service is taken seriously, but limited, VPN provider uses a secure level encryption AES 256, has the protection of data leakage, IPv6, DNS, WebRTC, but the limitations are the choice of protocol, VPN Area uses only one protocol Open VPN (TCP, UDP). Among the additional features will be available killswitch, ad blocker, and malware (only on Windows and macOS), as well as dedicated IP addresses and a private server for a fee. If you are considering the service for streaming and torrenting, the good news for you is that the service opens access to many streaming services without problems, there are even dedicated servers for this, but unfortunately, the speed will not be at the highest level, but enough to view video content in normal quality, without buffering.

You can connect up to 8 devices at the same time, which is average among VPN services.

We will test the speed and tell you about all the advantages and disadvantages of the service, and everyone will be able to decide for himself whether the services provided by VPN Area for the proposed price.

VPN Area provides high-security thanks to AES 256 encryption, which is considered the most secure today and is used by many governments, banks, and various organizations and structures marked "top secret". Among the protocols the choice is very limited, there will be only one Open VPN protocol (TCP/UDP), a protocol with strong encryption algorithms, open-source and high performance. Even with all the features of Open VPN, it would be nice to give users a choice among other protocols as well.

But you can also install IKEv2 via your computer's network adapter with a couple of simple steps and use it, if you have difficulties, there is a tutorial on the site.

With technical parameters such as AES 256 encryption, RSA 4096 handshake, HMAC SHA 256 authentication and Open VPN and IKEv2 protocols the service confirms its earlier words about perfect privacy and security of the service.

How is the data leakage of the VPN Area? We have tested the service applications for data leakage, IPv4, IPv6, DNS, WebRTC. The application has an IPv6 leak protection feature that is disabled by default, so keep that in mind and my advice is to enable it. I have not found any leaks of confidential information as a result of my check, for which we give the service a plus.

VPN Area is registered in Bulgaria. Considering the loyal jurisdiction of the country, Bulgaria is a good choice for VPN registration. The country has enacted several laws protecting the rights and freedom of citizens and privacy and these laws protect citizens from government intrusion into private life without justifiable reasons. However, there are many rumors that these laws are not always enforced amidst rampant corruption, there is still no direct evidence or documentation. But even if rumors are believed, the Area VPN cannot provide anything to the government or other entities, as the service maintains a zero-logging policy, which means connection times, history of site visits, and other personal information are not tracked and stored on the VPN provider's servers.

An important point for evaluating a VPN is speed. Speed depends on many factors, on the geographical location, the closer the actual distance to the server, the lower will be its speed. Also, an important factor is the server network, the more servers, the less the load on them among users and the possibility to connect to a close location. If you use complex encryption algorithms, respectively, the speed of this will also decrease, so pay attention to these factors. To test the speed of the VPN service, we start by measuring the speed without a VPN connection, then connect to the server and calculate the percentage difference in the speed. Our initial speed was 49.44 Mbps, then I connected to the server from Bulgaria and the speed was 15.56 Mbps. This means that our speed decreased by 68% after connecting to the VPN server, this figure is below average, I certainly had no buffering, but video content in HD I could not view, especially live sports broadcasts. Then I connected to the server from Australia and the speed was 12.97 Mbps. This is normal, because Australia is very far away from my actual location, compared to Bulgaria, the distance to Bulgaria was 1300 km and the distance to Australia was almost 14000 km. I decided to check the last server from the USA (New York) and I was pleasantly surprised with the results, because the speed was 20.18 Mbps, and the distance to New York was almost 8000 km. The conclusion is that the speed provided by VPN Area is not stable, on average, after connecting to the server, it decreases by 60%, which is not quite a satisfactory result compared to other VPN services.

Among the additional security features, VPN Area uses a killswitch, which serves to prevent information leakage, when there is a failure of the VPN connection, killswitch in the event of such a situation acts as an automatic switch, cutting off the Internet connection.

The service uses Stunnel servers to bypass censorship, especially in Asia and the Middle East. The advantage of the service compared to other VPNs is the Double VPN servers for extra security. The principle of Double VPN is simple, first, the traffic is sent to a remote server, encrypted, and then it gets double encryption when it reaches the second server. This provides additional security and privacy and makes it impossible to disclose your data.

What I like is the ad and malware blocker feature, as it is very distracting to watch video content, especially on free streaming services, VPN Area blocker instantly blocks pop-ups, so you can enjoy surfing and watching video content without unnecessary nerves and waiting.

VPN Area applications are well optimized with a clear and intuitive interface, the application is easy to use, all servers are sorted intelligently for streaming, P2P torrenting, as well as there are special servers, favorites, with dedicated IP addresses (although they are available for a fee).

Killswitch will only be available on Windows and macOS operating systems. In mobile applications, additional features include protection against DNS query leakage and port selection. 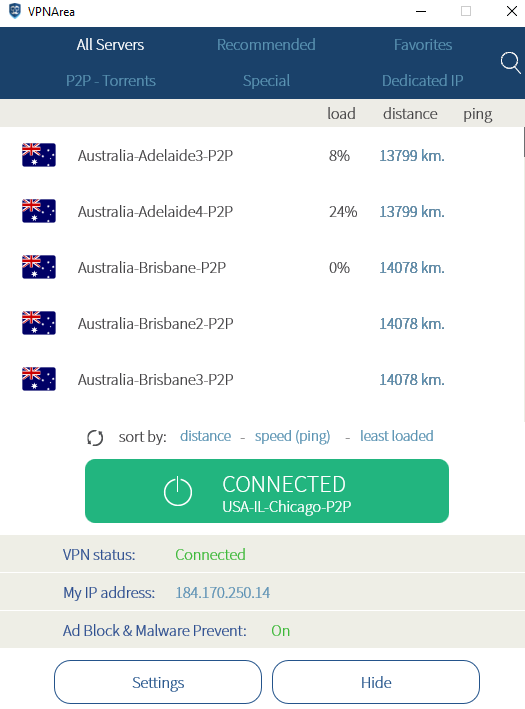 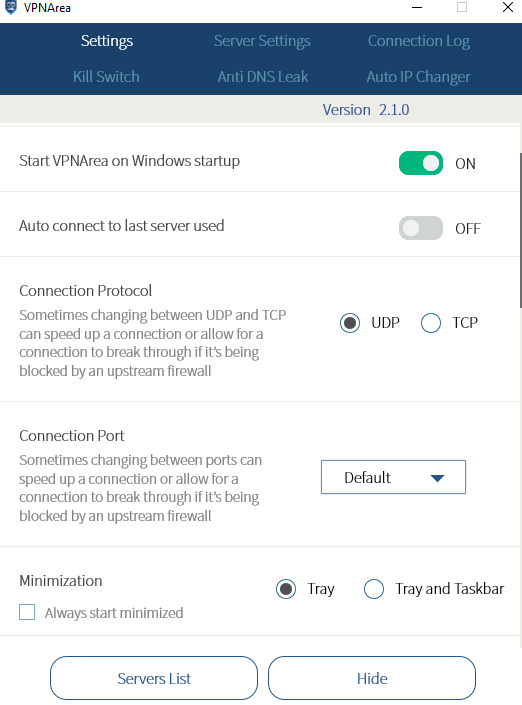 The VPN Area server network is quite modest and consists of 120+ servers in 55 countries. All VPN servers are real, which improves the performance of the server network, as well as all servers, have unlimited bandwidth. Usually, I did not meet the server load of more than 70%, which tells us about the ability to provide normal speed. In the application, all servers are conveniently sorted by streaming, P2P torrenting, Stunnel servers, private servers with dedicated IP addresses. And also there is additional information (distance, speed, least loaded).

What about streaming and torrenting? Good news for fans of streaming sites. VPN Area servers have handled the geo-blocking of many streaming services without much trouble and have successfully allowed me access to various libraries. I was able to access Netflix US, BBC iPlayer, SkyGo, DAZN, HBO, Hulu, Amazon Prime Video, and many other streaming services. I was especially pleased with how the Stunnel servers work in the Middle East and Asia. I watched the video content without buffering, in normal quality, the only site where I had buffering every 5 minutes was a site called gool365, which is live sporting events.

Good news also for those who are considering the service for downloading torrent files. There is support for P2P torrenting, with all the servers conveniently sorted for this task. But the main plus is the zero-logging policy, the service provides confidentiality of your digital identity when downloading torrents, which is especially for citizens of countries where downloading torrents is prohibited and this violation is punishable by law.

VPN Area uses applications for Windows, macOS, Android, iOS, Linux (Ubuntu, Debian, CentOS Fedora), Mint, router apps, Kodi, Fire TV. In terms of the set of functions the applications differ, for example, mobile applications do not have killswitch and ad blockers, and malware. The Android and iOS clients have a DNS leak protection function, port redirection, you can also enable the persistent VPN tunnel function, the default protocol is Open VPN, you can choose to connect via UDP or TCP. The applications are easy to use, with good performance, a nice user interface.

I liked very much the Windows client in macOS because of the extended functionality. It had an ad blocker, DNS leak protection, IPv6, killswitch, nice sorting of servers with more information, and port forwarding.

The only downside for me was that when I connected to the US servers from Dallas and Atlanta, it took a very long time to establish a connection.

Given the quality of the services provided, VPN Area provides competitively priced plans.

It's also worth noting right away that if you need a private VPN server with a dedicated IP address, it will cost an additional $20. Consider the prices of the plans:

You can pay for your subscription with credit cards, Paypal, GiroPay, Webmoney, Mercado Pago and for anonymous payment you can pay with bitcoins.

I liked the work of the VPN Area support staff. They are available 24/7, 365 days a year. There is a live chat available on the site where employees answer promptly, you can also contact them by mail and there is a system of tickets.

I had a question about the protocol IKEv2, why it is not in the application, I contacted a support employee, I was answered in a minute, they threw me a link to a guide to configuring it through the network adapter, no additional problems occurred. Also, the site is the available knowledge base, if you want to better understand how the VPN, the system of frequently asked questions, and various guides, including how to configure router DD-WRT, Gli. Tomato, Firmware. In general, I liked how the service support service is organized, all the detailed information is present on the site, and the employees answer promptly and their recommendations help to solve the problem. 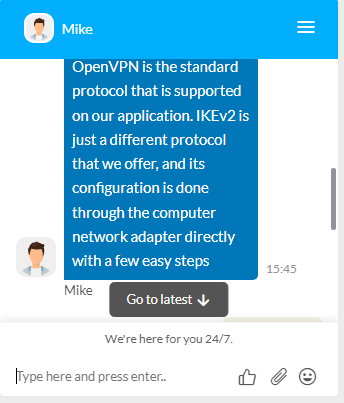 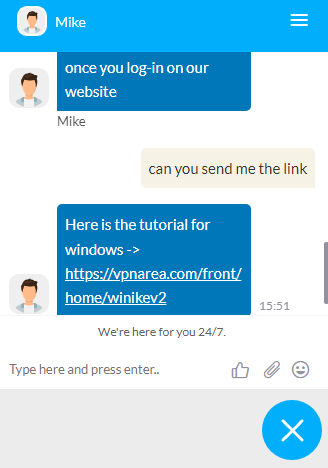 ✘ Short on features
✘ No browser extensions
✘ No choice of protocol