Today on the radar we have a VPN provider called Ultra VPN - service that was founded in 2006 and since 2020 is owned by the American company Aura, which is engaged in the digital protection of Internet users. Ultra VPN is inferior to many VPN providers in terms of functionality, for security it uses a reliable military-grade AES encryption with a 256-bit key length and Hydra and IPSec/IKEv2 protocols, among additional features there is an emergency killswitch and Exclude domain function, which we will talk about later. The server network of Ultra VPN is small in comparison with other VPN services and consists of 123 servers, but it covers the whole world, represented in 81 countries, 117 locations, servers have unlimited bandwidth and provide high speed and performance. However, there are a number of disadvantages of the service, especially privacy rights, which we will discuss in detail later plus the service is registered in the USA, as we one of the worst choices for registering a VPN, especially if the service keeps logs.

We made this review that you have detailed information about this service, saving your time for research, which we did for you, including speed testing, leak test, etc., from the information obtained, you can decide for yourself, based on your own needs, whether this service suits you or not.

As for the security and encryption algorithms offered by the service, here you can trust the service, consider the technical aspects of Ultra VPN. The service uses encryption, without which today it is difficult to imagine a reliable VPN - it is AES encryption with a key length of 256 bits, a handshake is performed using RSA keys with a length of 4096 bits, and HMAC SHA1 authentication.

Ulta VPN uses only 2 protocols to choose from, including Hydra and IPSec/IKEv2. IKEv2 - is an open-source protocol, reliable encryption algorithms, and fast performance, this protocol is especially welcome on mobile devices, because it is different stable work, often on mobile devices is disconnected Internet connection or change of one network to another, IKEv2 quickly adjusts work of the VPN in such circumstances. Hydra protocol has a high degree of confidentiality, it is much harder to recognize the censors, as it looks like common encrypted traffic.

In the application, in the settings, you can additionally enable the protection against DNS leakage. We have tested this feature, whether or not it is true. My IP address was successfully masked after connecting to the server from Finland, also no DNS query leaks were detected. Thanks to these technical parameters the service can provide secure data transfer, but I can't call it confidential, because it collects a significant amount of your personal information, we will talk about that in the next paragraph.

Ultra VPN is registered in the United States, a country which is one of the founders of the Five Eyes Alliance, for those who do not know, the countries members of this alliance actively exchange intelligence, although the country has a loyal policy regarding free Internet access and data privacy, but still due to a number of articles and advanced surveillance equipment, the country is noticed in mass online surveillance, these facts are not favorable for registration of the VPN. But if the privacy policy is zero user logs, then the service can still be trusted because there is simply nothing to show, but Ultra VPN is not, the service collects a significant amount of your personal information, namely email address, username, name, social security number, phone number, approximate location information based on IP address and other personal information. Google Analytics is used for analytics, which is a poor choice when it comes to privacy. Of course, all these data are not transmitted to third parties, with the exception of the approximate location (this information can be transmitted to marketers), but it seriously makes you think about your own data privacy, as the service keeps them for a certain period of time (it is not specified how long) and according to U.S. law will provide data about users if there is a legitimate reason. This fact suggests that if privacy and anonymity of your digital identity is a priority, this service is clearly not for you.

An important point when choosing a VPN is the speed, if the VPN provider critically slows down your speed, then the point of using this method of protecting your data becomes meaningless because you simply can not perform the usual actions, surf pages in the browser, watch video content, etc. The speed also depends on the geographical location of the server, the closer it is, the faster will be your speed, the complexity of the encryption, the speed of your Internet provider, the server network.

When testing the speed of Ultra VPN, I was impressed with the results, to begin with, I measured the speed without a VPN connection and it was 62.60 Mbps, then I connected to a server from Finland and the speed was 36.00 Mbps, which is a good result, the speed dropped by 40 percent, then I established a connection to the north from the United States (Charlotte) and the speed was 30.46 Mbps, given that the United States is at the other end of the world from my actual location, this is a very good result, I also tested 2 servers, one from the United Kingdom, there the speed was 35.18 Mbps and the server from Germany gave me 20 Mbps, a little worse than all previous servers. I was pleasantly surprised with the results, although this is not the speed of premium service, but it is enough for downloading torrents and watching video content in high quality.

Let's take a look at the additional security features the service offers. The killswitch feature, which protects against leakage of your data if the VPN connection is suddenly interrupted, is a kind of emergency switch that instantly shuts down the Internet connection in case of a malfunction in the VPN.

Exclude domain function - a useful function that is analogous to split tunneling, here you can create a list of domains that will be opened in conjunction with the VPN routing so that when you open them, the connection will be encrypted through the VPN tunnel. There is also a "Prevent IP leak" feature, which prevents your IP address from leaking when you connect. In the Android app, in the settings section, you can find the Trusted Network feature, which is an addition to security because you assign your own Wifi network status, whether or not to trust it. This is where the functionality of the service ends.

Application Ultra VPN is well optimized, it's a stable and fast connection, it is easy to use, the user interface is nice, in the settings you can change the theme color, so that your eyes do not get tired at night, in the settings you can change the encryption protocol, enable or disable the function killswitch, prevent IP leak, auto-connect, exclude domain, connection quality feedback. 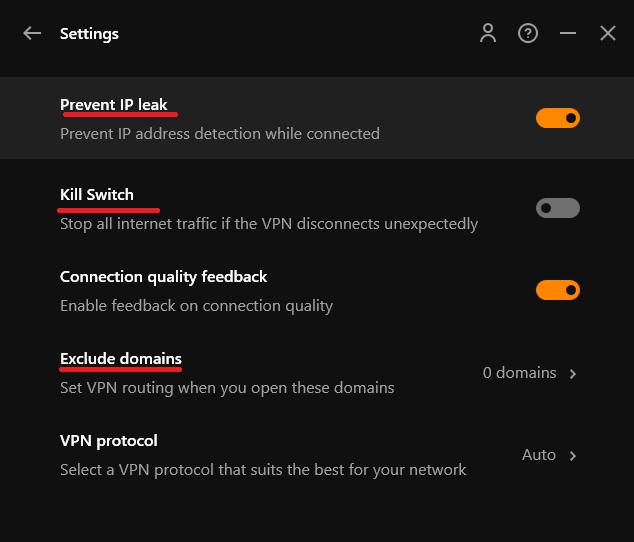 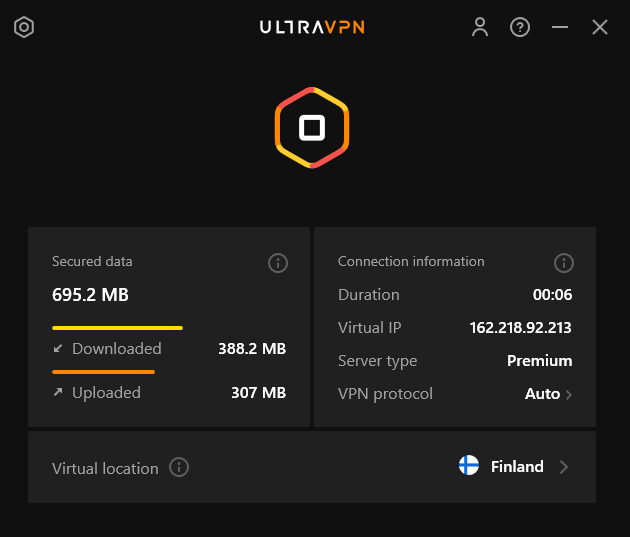 How good is Ultra VPN for streaming and torrenting? Fans of streaming services, good news for you, as Ultra VPN bypasses almost all geoblocking of streaming services and opens access without problems, if you want a service largely for watching streaming services or bypassing censorship, I advise you to use the Hydra protocol in the application. I got access to Netflix without problems after connecting to the server from Denver, I also experienced no difficulties when connecting to Disney+, Espn, BBC iPlayer, Amazon Prime Video and many other services. I was able to watch the videos in HD, without buffering, which I liked.

As for torrenting, I would not consider this service, yes, there is support for P2P networks, unlimited bandwidth, high speeds, but the most important thing to consider when downloading torrents, especially in countries with strict censorship - is anonymity, we looked at this point and unfortunately, the service can not guarantee it to you.

Ultra VPN has applications for Windows, macOS (Macbook Air, Macbook, Macbook Pro, iMac, Mac Pro, Mac mini), iOS (iPhone, iPad, iPad mini, iPod touch), Android (all tablets and phones). The applications are not particularly different from each other, the disadvantage for me is that the application for Android has no function killswitch. The applications are well optimized, with an intuitive interface, quick connection to the server, problems with installation and downloading the application you should not have, as everything is simple enough, in the extreme case you can contact support or find guides to install the application on the website.

Ultra VPN has a loyal pricing policy, given the services it provides. There is a free 7-day trial period, not many services provide such a service, also you can not worry about spending money if during the testing of the service you realize that it does not meet your expectations, because there is a 30-day money-back guarantee.

You can pay for your subscription using credit cards, PayPal. 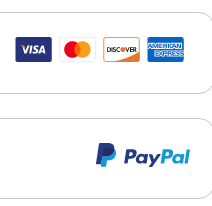 Ultra VPN support service is available 24/7 via online chat on the website, BUT it's available only for Premium users. You can also contact the technical support staff via email. I liked the tactful communication with the Ultra VPN employee, I had a question about the trial period, they answered quickly enough and to the point. On the site you can also find a section with frequently asked questions, knowledge base, if you want to understand more about VPN service and its technical features. In general, I have a pleasant feeling about the way the service has approached this issue, the site is well thought out, it is easy to go to the right section and download the application, but the only thing I would like to add is the technical information about the service, I found nothing about the protocols, encryption and security functions, all in general phrases and among these phrases, it is not clear what is the special features of the service. 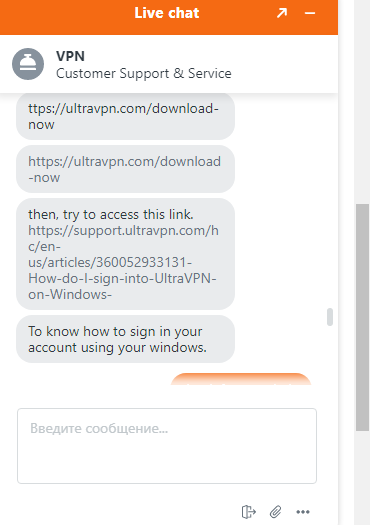 ✘ Collects a significant amount of information
✘ Based in the U.S.
✘ Lacks many features