Today we will talk about TunnelBear and find out its advantages and disadvantages, with which you can decide for yourself whether this VPN service meets your standards.

Tunnelbear is registered in Canada, not the most favorable country for VPN frankly, but this disadvantage is immediately covered by a no-logging policy, thanks to which your digital identity remains anonymous in the Internet space.

TunnelBear uses military-grade AES 256 encryption, it's hard to imagine a reliable VPN today without it. Also, the criterion of confidence in this service is the passing of independent audits by Cure53, we will talk more about that later. The choice of the protocol to work will not be great, among them OpenVPN, IKEv2, and IPSec, but for some users, and they will be enough, as they are well-proven protocols, which are characterized by reliable encryption of your data without loss of speed. Ability to connect up to 5 devices simultaneously.

Among additional features, we are offered VigilantBear, in other words, Kill Switch and GhostBear, which is an additional layer to ensure your security, we will come back to these features. Let's find out how Tunnelbear handles geo-blocking of streaming platforms and how good it is for torrents, and let's test the speed with an independent Speedtest. It's also worth noting that there's a free 30-day version and competitive paid plans, which we'll cover in the pricing section.

As for your security and privacy, you can safely trust TunnelBear. The service uses the strongest encryption to date, AES 256, which is the most secure algorithm used by banks, governments of many countries, and entities with high security. TunnelBear uses OpenVPN, IKEv2, and IPsec protocols, but compared with other services the choice is not so big, but these protocols, as practice shows, are one of the most popular and reliable that combines the perfect balance of security and speed, these protocols, combined with AES 256 will transform your traffic into unreadable information garbage that will take forever to decrypt.

You can connect to public Wifi networks without fear that your ISP, cybercriminals, or third parties will intercept your Internet traffic, keeping your data private and concealing your true location. Also, when testing IPv6, WebRTC was not found to leak information, confirming TunnelBear's firm claim to complete anonymity of your digital identity.

TunnelBear is registered in Canada, a country known for its laws to protect freedom of speech and support the state of unrestricted access to the Internet. But Canada is a member of the 5 eyes alliance and cooperation of this involves the exchange of intelligence, but recently this alliance has evidence of mass surveillance of its citizens. If the government or other security agencies have a warrant, the VPN provider must provide data on its users, but in this case, TunnelBear can't help, because information about your IP when connecting, the history of visiting sites the service does not track and does not store on its servers. I would also like to mention the independent audit by Cure53 (a cybersecurity company), which the company has been conducting since 2016, which speaks to the transparency of the service, in the beginning, Cure53 identified leaks in the Chrome extension, but then the company corrected the situation and always gets high marks for privacy and user data protection.

Speed is an important criterion when evaluating a VPN service because if a VPN provider slows down your speed significantly, it will leave only a negative impression and you will soon stop using it. When testing we use an independent Speedtest, first we tested the speed without a VPN connection, then to the nearest location, as the closer the server is, the less time it takes to process and transfer information and then we connected to the farthest place from us, in our case it is the United States. During the testing, the speed of the VPN connection was not always stable, but it was sufficient for watching video content without buffering and quite acceptable for downloading torrents. For each country, you will notice the Fastest Tunnel function, which will make it much easier to find a fast server.

Now we will take a look at additional security features. The first of these, GhostBear, makes your VPN traffic less visible to your ISP, the governments of other countries, what is it for? To bypass censorship, when the streaming service detects the VPN traffic, it immediately blocks your access to the content of their library, also the governments of other countries, which are known for strict censorship on the Internet (such as China, UAE, Turkey, Iran, Russia, etc.) where the VPN is prohibited at all, GhostBear makes it less visible, which simplifies the bypass of geoblocking and gives you access to free Internet in these countries. It is worth saying, however, that you should not use GhostBear at all times, as it may slow down your connection significantly, but you should only use it when you cannot connect using TunnelBear.

VigilantBear function is a Kill Switch, which is very useful when you have a malfunction in WTP, at this point your data, your traffic becomes most vulnerable, and cyber criminals or internet providers can easily intercept your data or make an attack, at this point killswitch will interrupt connection, so your IP information and data will not leak. That's the end of TunnelBear's additional features.

TunnelBear applications are well thought out and optimized with a nice user interface. You shouldn't have any problems downloading and installing the applications, at least the site has installation instructions, you can use additional functions by going to settings first, and then you need to go to the security section and enable optional security features that will provide additional anonymity and help deal with the masking of your VPN traffic. 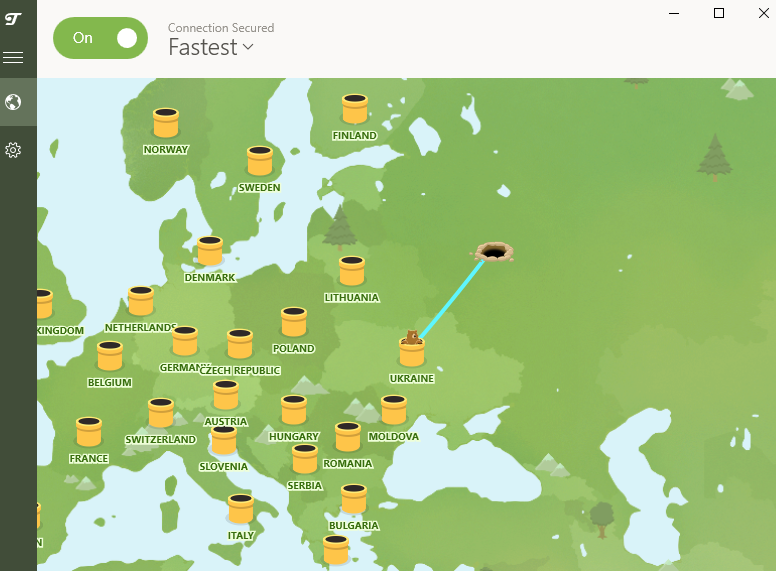 TunnelBear uses physical servers, the server network itself is not that large compared to others, but I did not notice server overload and the speed was always acceptable, constantly opening new servers in new countries, so as of September 30, 2021, four more countries were added to the list - South Korea, Moldova, Portugal and Cyprus. In general, TunnelBear is located in 46 countries of the world.

Recently, popular streaming platforms such as Netflix, Hulu, Amazon Prime Video, BBC iPlayer have learned to detect VPN traffic and therefore block access to their libraries due to geographical restrictions.

With access to Netflix TunnelBear coped, though access is not always stable, with the opening of access to Hulu service also coped, video content you can watch without buffering, though not always I got it in Full HD. With access to streaming platforms such as Kodi. BBC iPlayer I encountered several difficulties and as a result, I was not able to view the content of their library. With torrents the situation is normal, the download speed was satisfactory, but at the same time, I want to say that TunnelBear has no dedicated P2P servers.

You can connect 5 devices to Tunnelbear at the same time, which is average. The applications are available for such operating systems as Windows, macOS, Android, iOS, and extensions for Chrome and Firefox.

For the Chrome extension, you will have access to an online snooping blocker, increasing your privacy in the internet space when using the browser. Fans of iOS hasten to disappoint, as the GhostBear feature will not be available to you due to design restrictions.

Otherwise, the apps have all the functionality we have described, are intuitive and well optimized. You just need to create an account, download the application you need, and start using it. If you suddenly have any questions related to the installation of the applications, there are installation guides on the website or you can also contact support via email.

TunnelBear's pricing is competitive considering the privacy it provides for your identity. TunnelBear has a free monthly rate, which is enough to see if this service is right for you or not, you are given 500 mb, but if you subscribe to them on Twitter. you will be charged up to1500 mb. There is no refund policy. TunnelBear has 3 subscription plans, respectively, the longer the subscription term you choose, the less you will pay

You can pay by credit card, Bitcoin, PayPal.

The downside, of course, is the lack of live chat with support, because there are questions or problems that require immediate solutions and here, unfortunately, you can only contact support through the mail, the waiting time usually takes 5 hours. The website also has a blog where you can find interesting articles for yourself, there is also a section with frequently asked questions, besides that you will find guides on how to configure the application.