Today we will talk about TorGuard VPN, many thought the name of the service is somehow connected with the service Tor, but in fact, these two services are not connected to anything except the name, TorGuard is focused on BitTorrent, hence the name. The service has a large enough choice of functions and based on the orientation that you are most interested in, offers you appropriate plans. Who will use this service, almost everyone, businessmen who want to use VPN to further secure their business, users who need the service primarily for streaming, users for whom the main criterion is the confidentiality of data and anonymous email. TorGuard consists of 59 VPN servers/locations in 50+ countries all over the world. Data security and privacy are ensured by the most reliable AES 256 encryption, Open VPN, Wireguard, Open Connect, IKEv2 protocols and hidden servers Stunnel. Additional security features of TorGuard include killswitch, ad and malware blocker, DNS leak protection, IPv6, WebRTC. Having studied the privacy rules, the advantage of TorGuard is that it maintains a zero-logging policy, which is very important because the service is registered in the United States, which is one of the founders of the Five Eyes Alliance. In this review, we will look at all the advantages and disadvantages of the service, test the speed, do data leakage tests and look at all the nuances so that you have a complete picture of what the service is really like.

Let's talk about one of the key points of the VPN, namely privacy and security. TorGuard uses military-grade AES 256 encryption to provide these two points, but for a faster connection you can choose AES 128, but then the security level will also be lower, at least there is a choice. The service uses the protocols OpenVPN, Open Connect, Wireguard, IKEv2. It's nice to see the Wireguard protocol among such an arsenal, as it has recently become the new gold standard in the ratio of security and fast performance thanks to modern cryptography, open-source. Wireguard is structured as follows: Curve25519 for key exchange, ChaCha20 for symmetric encryption, Poly1305 for message authentication codes, BLAKE2s for the cryptographic hash function. SHA 512 is used as the hashing method, but SHA1, SHA 256 are also available. There is internal encrypted DNS and protection from IPv6 traffic leakage, which is nice to see because many VPN providers simply disable traffic transfer via IPv6.

We have tested leakage of DNS requests, IPv4, IPv6, and WebRTC, I liked the results of testing as there was no leakage of confidential information.

With such an arsenal of security features, it's safe to say that TorGuard can provide the claimed privacy and anonymity of your digital identity.

TorGuard is registered in the USA, which is one of the founders of the Five Eyes Alliance, this alliance involves the cooperation of several countries for the exchange of intelligence, but as we know through many articles, the USA is known for mass online surveillance of ordinary citizens, constantly covering it up as the fight against terrorism, but nevertheless, the government supports free access to the Internet. If a VPN provider has chosen not the most favorable country to register a VPN, as in this case, then it is necessary to keep a zero-logging policy, given the jurisdiction of the USA and fortunately, TorGuard does not collect, does not store information about its users, connection time, IP address when connecting, history of site visits and other personal information, which witnesses that even if a warrant is received for information about the service user, TorGuard can not help, because the servers of the service do not have any information.

Also, one of the main points when choosing a VPN provider is performance. When testing the speed I used an independent Speedtest, first I measured the speed without VPN connection and it was 46.03 Mbps, then I connected to a server from Finland, Helsinki - the speed was 38.71 Mbps, which is a very good result, as there was virtually no change in speed. In the testing, I had a good result for Germany with the speed of 42.73 Mbps, then I checked Sydney in Australia with the speed of 33.06 Mbps, which is pretty good considering the distance from my actual location to Sydney is almost 15000km. The speeds on the American server from Los Angeles were 22.05 Mbps. The numbers tell us fast speeds, as the service originally claimed, but I experienced connection instability several times, especially when connecting to the server from Australia. When I decided to change the protocol Wireguard to Openconnect, I could not connect to almost any server, it was the same with Open VPN, hence the conclusion that a stable VPN connection works only with the protocol Wireguard.

The service offers a wide range of additional features. The first among them is one of the most useful features killswitch, in the app it is called App kill, but the essence does not change - it is a function that ensures the suspension of our Internet activity in case of a break in the encrypted connection, minimizing the risk of data leakage.

Stealth VPN allows you to bypass restrictions where the use of a VPN is prohibited by masking the VPN traffic as regular web traffic.

Dedicated IP addresses for viewing streaming services, a very useful add-on, thanks to the dedicated IP addresses you get access to almost any streaming service, though it's worth noting right away that this add-on is available in the Anonymous VPN Pro package, this if considering the service for viewing video content libraries of various streaming services because in the standard package service can't bypass the geographical blocking of many services. Also to circumvent censorship, especially in countries such as Turkey, Russia, UAE, Saudi Arabia, China will be useful to use a proxy SOCKS5, which is excellent in bypassing geographical restrictions and P2P file sharing, but note that it can not provide privacy and security of the same high level.

TorGuard has an adware and malware blocker, this feature protects you from unwanted ads and prevents you from going to malicious sites.

TorGuard applications are easy to use, with an intuitive interface, suitable for both beginners and advanced users who are technically more equipped, they can change a lot of settings in the application for themselves, here for them will be a great choice, I will just list the sections in the settings, among them: General, Scripts, App kill, Debug, Network, Proxy, Servers and in these sections you can change a lot to suit yourself. 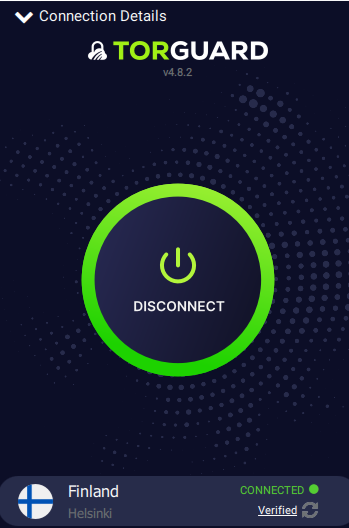 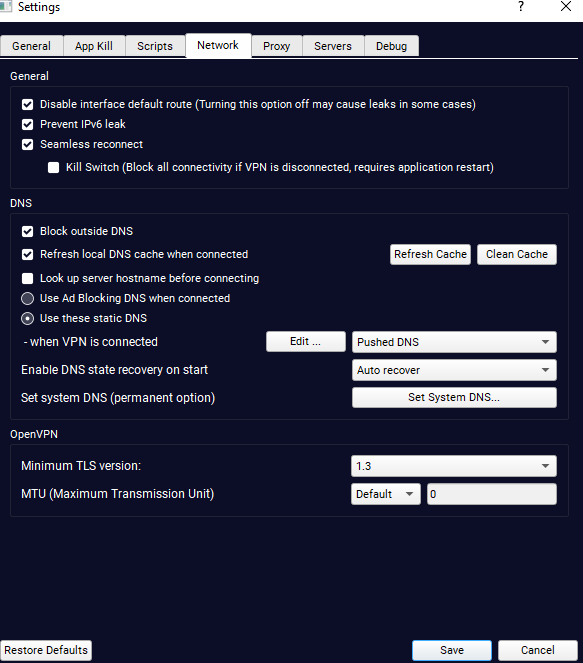 TorGuard VPN has a massive server network of 59 VPN servers in 45 countries around the world. This is important because the more servers and locations are available, the less server load between users and there is an opportunity to connect to the nearest server, as the closer it is, the faster the speed will be.

How good is TorGuard for streaming and torrenting? If you are considering the service for these purposes, it is better to choose Anonymous VPN Pro or Streaming Bundle package.

The VPN Pro package has dedicated addresses that bypass the geographical restrictions of streaming services like Netflix, Disney+, Amazon Prime Video, Hulu and so on. In the Streaming Bundle package, the available regions will include the U.S., U.K., France, Germany, Japan, and Spain with unlimited streaming. The streaming package is also good because video content is played without buffering, in maximum quality, among the available platforms will be Netflix, BBC iPlayer, Hulu, Amazon Prime Video, HBO GO, Espn, Disney+ and more.

TorGuard is great for torrenting with unlimited bandwidth, P2P network support, compatibility with uTorrent, Bittorent, Softtorent and more. The service is good for torrenting because it has a zero-logging policy, which is especially important for countries with strict censorship while providing high speeds and anonymity for your digital identity.

TorGuard is compatible with such operating systems as Windows, macOS, Linux, Android, iOS, there are extensions for Firefox and Chrome browsers, as well as an application for routers. You can connect up to 8 devices at a time in the standard package, and up to 12 simultaneous connections will be available in the VPN Pro package. You can also pay one extra dollar for an additional device, which will end up being expensive, but at any rate, you have a choice. The applications are well optimized, with an intuitive interface, high performance, fast connections, a little bit different in terms of functionality, so for example in mobile versions will not be available killswitch, but all other functions are available.

The money-back guarantee is 7 days, unfortunately there is no trial period.

You can pay by credit card, PayPal, Bitcoin and Litecoin, gift cards or many other ways.

TorGuard support is available 24/7, 365 days a year. You can contact the staff via online chat, email, the response time is usually not long, in the online chat I was answered within a few minutes. You will also find a section on the website with frequently asked questions, guides to install and configure applications, and router manuals. The TorGuard support service is their great advantage because the service takes this issue seriously. I had a problem connecting to a server from Australia via Open VPN, the employee from the chat room quickly responded to the problem and quickly found a solution, it turns out I had a port that does not support the server, this is what online chat is for, to quickly solve the problem.

✓ Robust encryption
✓ Unlimited bandwidth and speed
✓ Zero logging policy
✓ Massive server network
✓ Up to 8 or 12 simultaneous connections, but you can increase this number for an additional fee
✓ Multifunctional

✘ Registered in the U.S.
✘ No killswitch on mobile apps
✘ No public audits
✘ Sometimes unstable connections if you use protocols other than Wireguard