Mullvad VPN - VPN provider which originated in 2009, belongs to the company Amagicom AB, whose motto is "free communication". The service is registered in Sweden, known for its loyal policy of free speech and is a supporter of free access to the Internet. We will analyze the advantages and disadvantages of the service, conduct tests on the DNS leak, IPv4, IPv6, WebRTC, find out how good the service to bypass blocking known streaming sites and what the performance is at that.

Mullvad VPN uses reliable encryption corresponding to the modern high standards AES 256, protocols OpenVPN and Wireguard, server obfuscation to hide the fact of using VPN traffic, the software is open source, among additional features you will have an emergency switch and split tunneling, also protection from DNS leaks and what I liked Mullvad not lazy, just cutting off traffic through IPv6, but properly routes traffic through IPv6 protecting it from leaks. The service allows P2P torrenting, giving you anonymity when downloading torrent files.  Importantly, Mullvad has a zero-logging policy and you don't even have to provide your email address, combined with the anonymous payment in cash or bitcoins means your privacy is preserved when using a VPN.

Consider one of the most important points when choosing a VPN, it's about privacy and protecting your digital identity online. Mullvad has taken this issue seriously and uses ultra-modern and reliable algorithms to protect your data, let's take a closer look at the technical aspects. Mullvad VPN uses military-grade AES 265 encryption. The server authentication uses 4096 bit RSA keys (with SHA512), for forwarding secrecy DHE, the keys are updated every hour. Mullvad VPN decided to use only 2 protocols Open VPN and Wireguard, which narrows the choice, but these two protocols with open source and reliable encryption algorithms are a great solution and quite enough to ensure privacy and anonymous transfer of your data.

We have tested DNS, WebRTC, IPv4, IPv6 leaks and the test results revealed no leaks in any category, a separate word about IPv6 protection, as many VPNs have not learned how to work IPv6 traffic, through which you can also identify and Mullvad VPN not only disables it, as many do but creates a correct secure traffic routing preventing information leakage.

It's also worth mentioning that Mullvad's software is open-source and you can check it out, which shows you that their policy is transparent and self-assured. The service also blocks ports to prevent spam and to protect against vulnerabilities in the UPnP suite of networking protocols. To summarize about privacy and security, Mullvad VPN has approached this issue with great responsibility and we can safely say that the service provides 100% of the claimed anonymity of your digital identity in the Internet space. 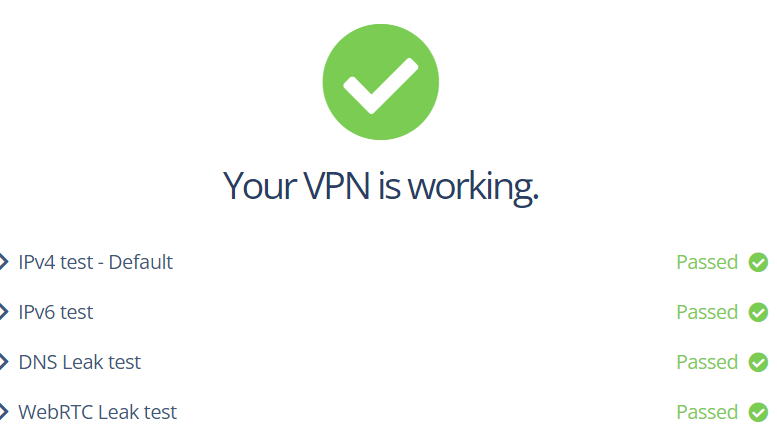 Mullvad VPN is registered in Sweden, a country known for the protection of freedom of speech, protection of individual privacy, but also Sweden is a member of the 14 eyes alliance, which does not guarantee the privacy of your data, as members of this alliance constantly exchange, as reported only "intelligence" to combat terrorists, but the reality as we know different. Nevertheless, for someone, including the government, to invade your privacy or to access the traffic revealing your personal information, there must be court permission and nothing else. Even if the government or other authorities have such permission, Mullvad cannot help them, because it has a zero-logging policy, your information is not recorded and stored on servers, moreover, the service does not even ask your email address to create an account, but simply generates an identification number, in order to ensure the maximum privacy of your data.

Another thing that gives credibility to the users of the VPN is, of course, the passing of an independent audit. Mullvad VPN is independently audited by German cybersecurity company Cure 53 and has not found any personally identifiable information (PII) or information that violates privacy, but it has also found a small number of exploits that the company works with and has already addressed some of them, at least this shows a transparent system and a desire to improve, which I like.

When choosing a VPN, many people worry about speed. It's very important that when you choose a VPN, your speeds don't drop to values where you can't view content, otherwise what's the point of using a VPN if you can't enjoy surfing the Internet without lag. We tested the VPN, as always, using the site Speedtest, to begin with, we measured the speed without a VPN connection, and it was 68.69 Mbps, then I connected to the nearest server, since the closer geographically located server, the faster the speed, I chose Latvia and the results were not happy, the speed was only 18.82 Mbps, then I decided to test the most distant from me, which is the server from the United States, there were better results - 15.09 Mbps, given my geographic location, this is a good result and finally I decided to test the server from Austria and was pleasantly surprised, the speed was 27.64 Mbps and dropped by 60%, which is average for a VPN. The conclusion can be made the following, that the speed of the server is not always stable, it is necessary to consider several factors that affect the speed, including geographic location, the server network, so that servers were not overloaded, the tunneling protocol and other, automatic selection of the server is not, so you need to choose based on these factors and objectives server.

Mullvad is a multifunctional service and among the additional features, the service uses an ad blocker and malware, protecting you from visiting unwanted sites and preventing you from being attacked by marketers. The split tunneling feature is a feature that allows you to choose applications or sites where you do not need to use a VPN, such as for banking transactions or you want to enjoy local content, so you form two tunnels, one fully encrypted with all its features to keep your data secure and your identity anonymous, and the other tunnel to use the local network without a VPN.

Emergency shutdown feature - killswitch works as an emergency switch to disconnect the Internet when you have a connection failure with the VPN application, thus preventing you from data leakage.

Shadowsocks proxy is an open-source protocol and you have a logical question what is it for and how is it different from others? The fact that Shadowsocks was developed by a Chinese programmer to bypass the great Chinese firewall in China, but Shadowsocks does not guarantee your privacy and confidentiality, it does not hide the traffic, as the VPN, and masks it in the guise of HTTP, since Shadowsocks uses multiple TCP connections, it works faster than the VPN, for those who want to bypass censorship in China, Shadowsocks is an excellent solution.

Mullvad applications are easy to use, well optimized, in Windows, the application is small and neatly located on the edge of the screen, so as not to distract us from our work, in the settings you can enable all the additional functions that we mentioned earlier, as well as select the protocol, everything is informative and clear, you just need to create an account, download the application and enter the identification number when receiving an account, but if you have questions, you can find guides to install and configure applications on the website. 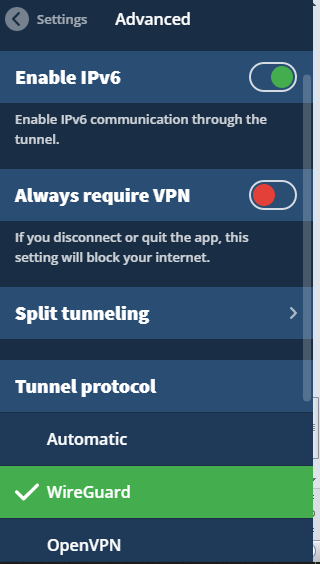 Mullvad VPN server network is not large compared to other VPN providers, Mullvad has 63 VPN servers located in 38 countries. Mullvad servers allow P2P/ BitTorrent, there are also obfuscated servers, which in their structure use special algorithms to hide the use of VPN traffic, the bandwidth on servers of 1 Gbps.

Unfortunately for fans of the streaming platforms Netflix, Amazon Prime Video, BBC iPlayer, Hulu you will be disappointed. Yes, recently streaming sites have learned to detect VPN traffic and block it, but many services cope with this and bypass blocking by the geographical principle of content restriction. I could not get access to any of the above sites, but originally Mullvad did not position itself as a service for getting access to the libraries of streaming sites. I decided to contact support and said that every time I want to connect to Netflix, the site writes to me that went wrong and suspects the use of unblocker or proxy, the answer was long, because Mullvad support is not working 24/7 and the answer was simple - it is split tunneling, unfortunately, this is the only solution so far and you can only settle for local content.

Mullvad VPN gives us 5 simultaneous connections, which is average among other VPNs. The service has applications for operating systems Windows, Linux, macOS, Android, iOS, as well as an extension for Firefox, which has a built-in SOCKS5 proxy. Unfortunately, applications have limited functionality, for example, the separate tunneling will not be available on macOS, iOS, the custom DNS server will not be available for iOS. Proxy Shadowsocks will not be available for iOS and Android. Currently, a large number of people use the operating system macOS and iOS, and thus the service is deprived of a large number of users who require these functions, but Mullvad considers these issues and looks for a solution to this problem. As for Windows fans, they can be happy with everything, since the Windows application applies all of its features.

Mullvad price policy since 2009 has not changed, confirming its stability and stability, the service does not offer any discounts except for payment in bitcoins, in which case you are given a 10% discount, the service has a 30-day money-back guarantee, but be careful, because when you pay with cash due to money-laundering crimes, you will not get your money back.

You can pay with credit cards, PayPal, bitcoins, Bitcoin Cash, Swish, Giropay, Eps transfers, Bancontact, iDEAL and Przelewy24, it is also possible to pay the subscription in cash, everything is simple, you put cash and payment token in an envelope send directly to Mullvad VPN. 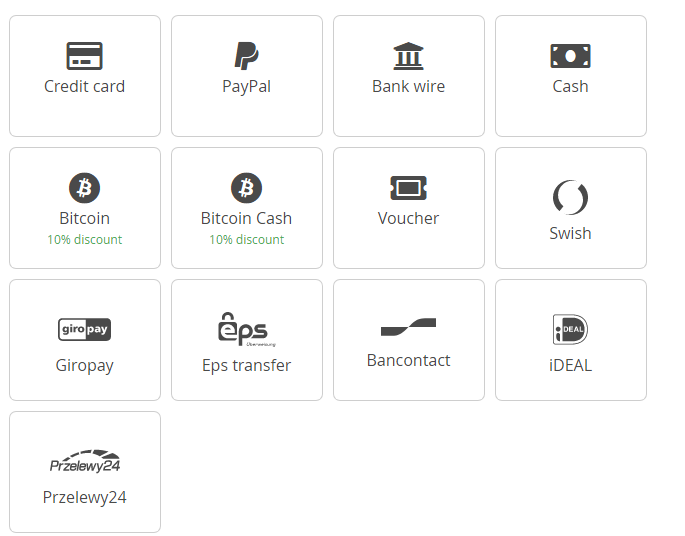 Support for Mullvad VPN is not available in 24/7 mode, sometimes you have to wait a long time to answer, you can only contact a specialist via e-mail, and this is a minus, because sometimes there are situations that must be instantly resolved, and you can do this only with the live chat. But the support section is well worked on, so that you have fewer such situations, the site has a guide to installing and configuring applications, a section of frequently asked questions, an informative search where you can find the article that interests you, and you can also visit the blog to find an answer to your question, or ask it yourself.