Today we will talk about iVPN. iVPN started in 2009 and has long held a strong position thanks to its transparent policy and the security features it offers. The service does not have a large server network compared to other VPN services, it has only 71 servers in 32 countries, but iVPN servers have normal bandwidth, there is P2P support, and also iVPN servers have a stable operation.

Service uses one of the strongest encryption to date, without which it is difficult to imagine a secure VPN - it's AES encryption with a key length of 256 bits, uses protocols Open VPN and Wireguard, which tells us about the high level of protection of your data and ensuring anonymity of your digital identity. Among the additional features, the service offers killswitch, trusted network, obfsproxy, port forwarding, IPv6 support, anti tracker, all these features we will discuss in detail. We will test the service for IPv4, IPv6, DNS, WebRTC leakage, and also how good service for streaming and how fast on different servers. The service can be considered primarily for the U.S. because in the U.S. the service has 26 servers, high performance, and stable operation. At the same time, you will be able to connect up to 7 devices, although this is when subscribing to the package iVPN Pro, there is also a package iVPN STANDARD, we will also talk about the differences. We will consider all the advantages and disadvantages of the service, making it easier for you to research the service, based on which everyone will be able to decide for themselves whether this service is suitable for them.

The service is highly trusted among its users, let's look at why. If we study the technical security of the service, iVPN uses AES encryption with a key length of 256 bits, this encryption is used by many governments and agencies marked "top secret", to break the AES 256 encryption, cybercriminals will take forever and not the fact that they will succeed. What about protocols? The service uses only 2 protocols, yes, the choice is small, but among them, Open VPN and Wireguard, both open-source protocols, Open VPN is known for its reliability and high performance, it uses the OpenSSL library and 256-bit encryption. The Wireguard protocol uses modern encryption algorithms, is easy to use, and is considered the fastest among the other protocols. No DNS, IPv4, IPv6, WebRTC leakage was detected during the tests, which is an additional plus for the service security. There is also support for IPv6, which means that iVPN does not just disable data transfer through IPv6 as many VPNs do, but makes this connection encrypted, providing its users with secure transmission of confidential information.

iVPN is registered in Gibraltar, this territory belongs to the UK, but has its government, unfortunately, the issues related to the protection of rights, security, online surveillance of its citizens fall under the jurisdiction of the UK, although Gibraltar is not part of any of the alliances, this country due to belonging to the United Kingdom exchanges data with countries from the 14 Eyes alliance. The good news is that the service does not store logs, i.e. there is no traffic logging, no timestamp when connecting, no DNS request logging, no IP address logging, also when paying you can use bitcoins, cash and when registering an account you do not have to specify an email address, all these parameters further increase user anonymity.

For analytics the service uses Matomo together with Google Analytics, which is known to collect a lot of confidential information, Matomo is open source, which enforces confidentiality rules.

iVPN is owned by Privatus Limited, which was independently audited by cybersecurity company Cure 53, which tells us about the service's transparent policy, confidence in its security features, and desire to constantly improve, in the report the company indicated no leaks of confidential information, which causes trust in the service.

Performance is also an important point when evaluating the VPN provider, otherwise, it makes sense to use the protection of your data without the ability to view or download content or just surf the Internet, the speed depends on several factors, geographic location, the closer the server, the faster the connection speed, the encryption you use, the more complex it is, the more delay will be, the server network, the more servers, the less the load on them, etc. When testing the speed of iVPN servers I was pleasantly surprised as the performance is quite good.

What additional security features does iVPN offer? For starters, a useful killswitch feature that disconnects you from the internet when your VPN app connection fails, at this point when the connection fails, your data becomes vulnerable and there is a serious risk of leakage of your data, especially used by cybercriminals when you are connected to public networks, killswitch feature immediately disconnects your internet access, thereby preventing the risk of your confidential information leakage.

Trusted Network function, with this function you assign a status to the Wifi network, whether to trust it or not, and based on the status change the actions when connecting to Wifi.

Multi-Hop function - this function additionally increases your security level, as the connection is made through the input and output server, in other words, multi-level tunneling, especially a useful function for people engaged in caesura, to bypass restrictions.

The beta version of the split tunneling feature allows you to share files, watch videos under VPN encryption while still being able to enjoy local content.

Anti tracker, I have tested many different ad blockers and malware and when I tested this feature from iVPN, I was impressed because iVPN's Anti tracker blocks immediate pop-ups from streaming services and you almost do not notice it, which makes surfing the web much easier. There is also port forwarding, but this feature will only be available in the Pro version.

iVPN open-source application is easy to use, there is a virtual map, the application itself is intuitive and informative, you can see the speed of the server, sort them into different categories, change many parameters to suit yourself. 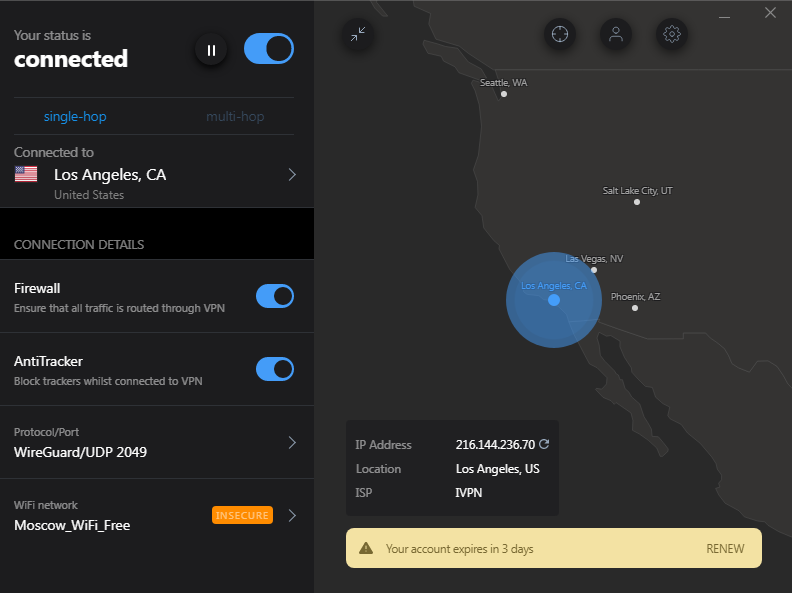 iVPN does not have a massive server network compared to other VPN providers, it consists of 71 servers in 32 countries. However, the iVPN server network is stable, has high performance, and has its own private DNS servers.

How good is the service for streaming and torrenting? I got access to Netflix, BBC iPlayer, Hulu, Amazon Prime Video, Disney+ without any problems, the service coped well with geoblocking of streaming services and opened access to watch content in high quality, without buffering. Journalists, activists who fight for privacy rights should take a closer look at this service because thanks to obfsproxy function they can easily bypass censors and anonymously do their work without fear of online surveillance of their activities.

Service supports P2P, iVPN is also suitable for torrenting because it does not keep logs and provides high speed when downloading, it is especially important for users from countries with a strict caesura, where downloading torrents is prohibited and may be punishable up to imprisonment.

iVPN uses apps for Windows, iOS, macOS, Android, Linux, Router, NAS, Raspberry Pi. All applications are open source, feature great functionality, with a nice user interface, they are easy to use and intuitive. Features will vary based on the package you choose. You can change some settings in the application, for example, change the Open VPN or Wureguard protocol. Enable or disable additional features such as killswitch, Multi-Hop, Trusted Network and others. In the application, you can sort servers by speed, and you can also remove from the list those which in your opinion are not fast. You can connect up to 7 devices at a time with an iVPN Pro subscription and up to 2 connections with an iVPN Standart subscription.

There is also a virtual map in the app, which makes it easier to navigate. In general, iVPN applications are well optimized, with high performance and fast connection to the server.

The service offers two pricing plans, which against the background of other VPN services look more expensive, given the functions that the service offers. The iVPN Standart package includes up to 2 simultaneous connections, all protocols and anti-tracker, the iVPN Pro package includes up to 7 simultaneous connections, Multi-Hop, port forwarding, anti-tracker and all protocols. Consider Pricing:

There is a 30-day money-back guarantee. You can pay by credit card, PayPal, Bitcoin, Monero and cash.

Support is available 24/7, 365 days a year, and you can contact support via online chat or email. What I definitely did not like was that for 4 days I tried to contact support via live chat and they were always offline, so I never managed to contact them to clarify some issues, this fact disappointed me, because if the user wants to solve the problem soon, he will not be able to. Apart from this drawback, the iVPN support service is well organized, the site has various manuals, a section with frequently asked questions, an informative knowledge base.