Today we will talk about HotSpot Shield, its advantages and disadvantages, how the free version differs from the paid one, what security features the service offers us, how it copes with blocking streaming platforms, and its performance, based on this data you can determine for yourself whether HotSpot Shield is suitable for you.

HotSpot Shield is founded by David Gorodiansky, the owner of the company Anchor Free, which deals with privacy and security on the Internet, VPN service is registered in the United States, which, as we know is part of the Five Eyes Alliance, which is a minus when choosing a VPN, because the U.S. through many articles known for mass surveillance of its citizens. HotSpot Shield states that it does not store or record logs, yes indeed it does, but there are some nuances that we will deal with later. The service gives us military-grade encryption, IKEv2/IPSec and its own Hydra protocol, split tunneling called Smart VPN, emergency switch, large server network in 93 countries, ad and malware blocker, and up to 5 simultaneous connections from one account. The site provides very little information regarding features and technical aspects, but let's see what we found out and what the tests for speed, DNS leakage, WebRTC show us.

How is HotSpot Shield doing with privacy and security? Hot Spot Shield uses military-grade AES 256 encryption and this information I was able to find out from a support employee, I would like to see it on the website. Next, I started to find out what protocols the service uses, many sources mention the Open VPN protocol, but I couldn't find it in the app, the support person told me that they use the proprietary Hydra protocol, which is considered faster than other protocols and it uses less bandwidth in data transmission, as stated HotSpot Shield, in my opinion, there are no obvious features from other protocols, moreover, I trust more open-source protocols such as Open VPN, Wireguard, also will be available protocol IKEv2, which is excellent for mobile applications and is considered reliable and safe, respectively we have a choice of 2 protocol Hydra and IKEv2. We have been tested for DNS and WebRTC leakage and Hotspot Shield successfully passed the test masking my actual IP. To summarize the security of the VPN connection, HotSpot Shield gets a high score due to strong military-grade AES 256 encryption, DNS, and WebRTC leak protection, but not the maximum score because there are no open-source protocols. 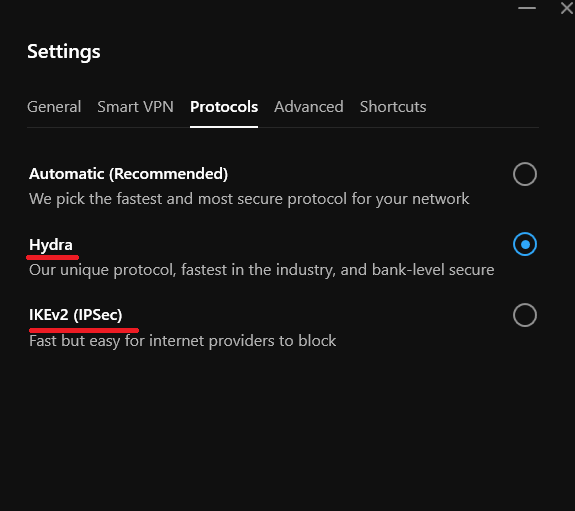 HotSpot Shield is registered in the USA, which is known for its loyal attitude towards free Internet access, but we also know that it is a member of the Five Eyes Alliance, whose countries share intelligence, but also judging by numerous articles, massively spying on its citizens and not only, having at its disposal advanced surveillance technologies. If the government requests to provide information about its users legally, the VPN service is obliged to do so, seemingly not a problem, as HotSpot Shield has a zero-logging policy, but still, the service collects more metadata compared to other VPN services, including Domains to which users have access, although in an anonymous format, payment information, duration of VPN sessions and many other data, but the most important data such as IP address connection time, history of site visits HotSpot Shield does not record and does not store it on its servers, which is a plus.

I also liked that HotSpot Shield publishes a transparency report saying how many orders came into the company and does not hide this fact, but I would also like to see the company independently audited.

Now let's look at how much the speed decreases when using HotSpot Shield. For testing we used the site Speedtest, although the service offers us his tester, we decided to use an independent. To begin with, we tested the speed without a VPN connection and it was 49.36 Mbps, the test results when connecting to the VPN I was very surprised for the better, I connected to the server from Russia, as it is close to me, the speed was 38.19 Mbps, this indicates a speed reduction of only 20%, which is a good result. Then I connected to the server from the U.S. and the speed was 36.67 Mbps with a ping of 229, this really surprised me, I retested the server but the speed was the same, considering the fact that the server is far away from me, this was an excellent result and lastly I tested the server from Australia and the speed was at 32.72 Mbps, which is also excellent, considering the fact that the distance between me and Perth is 12221 km.

Among the additional security features, HotSpot Shield has in its arsenal of split tunneling, emergency switch, adware and malware blocker.

Split tunneling function - in the application it is called Smart VPN, with this function you can choose a list of applications to bypass VPN traffic when the situation does not require it, allowing you to access the local network without the involvement of the VPN, it is required for sites and programs that block VPN traffic, Internet banking and not only.

The Kill Switch feature is a useful option because when you break your connection to the VPN, your data becomes vulnerable and can be intercepted by third parties, killswitch immediately disconnects your access to the network until the VPN is repaired, thereby providing you with anonymous surfing and privacy of your identity.

Ads and malware blocker blocks annoying ads that prevent you from enjoying content, this feature warns you that you might go to a malware site and then blocks the site altogether.

HotSpot Shield is easy to use, you just need to create an account, download the application and that's it, the user interface is nice, the application is intuitive if you have any questions you can contact support or find guides on the website, I like that there is a section with the recommended servers for streaming in the United States and UK, and the recommended servers for games, such as Fortnite, Roblox and others. Also in the app you can test the speed of your VPN connection. 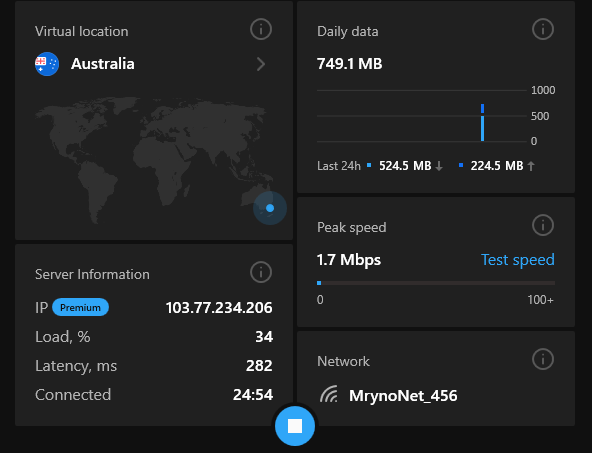 HotSpot Shield has a large server network of more than 130+ VPN servers locations in 87 countries, not as massive as other VPN services, but still enough to evenly distribute the load on servers among 650 million users.

HotSpot Shield servers are present all over the world, specifically in the Americas, Europe, Asia Pacific, Africa and the Middle East.

How good is HotSpot Shield for streaming and torrenting?

This item is for fans of streaming sites, recently it has become increasingly difficult to bypass the firewalls of streaming sites such as Netflix, Amazon, Hulu, BBC iPlayer because they have learned to detect VDP traffic and immediately block it. Fortunately, HotSpot Shield was able to bypass blocking Netflix, Amazon, BBC iPlayer, Hulu, Disney+ and open access to view content. Moreover, in the virtual locations section, you can find specially optimized servers for American and English libraries Netflix, Amazon, BBC iPlayer, as well as fans of games such as Fortnite, Roblox can find specially optimized servers for these and other games, the speed will be fast and with a normal ping without slack. Watch video content you can in the free version in SD, in the premium version in HD, without buffering with excellent speed.

HotSpot Shield has applications for Windows, Linux, macOS, Android, iOS, as well as applications for Chrome, TV and routers, in terms of functionality the best application will be for Windows, in the application for iOS unfortunately separate tunneling will not be available. At the same time you can connect up to 5 devices for one account with a Premium subscription, and with the Family Premium subscription, you will have 5 accounts and 5 connections for each. I especially liked the application for Windows, which is well optimized, there is a button for automatic connection and also for convenience there is a section with hotkeys, a section where you can enable additional features such as split tunneling, emergency switch, ad blocker and data leakage prevention, with a premium subscription using the F1 key you can quickly contact the support team via live chat or send a message. If you have trouble with the installation, there are guides on how to install and configure the applications, but I think even a beginner should have no trouble figuring it all out.

HotSpot Shield offers a free version, Premium version and Family Premium, of course there are differences among them. The free version will give you 500 Mb per day, 1 device to connect at a time, watch SD videos, one available location in the US, average speed up to 2 Mbps, no online chat and mail support, and no optimized servers for streaming and games. With a Premium subscription you get optimized servers for Netflix, Disney+ and more, optimized servers for games, up to 5 concurrent connections, free 7-day trial, unlimited data limit, 115 locations, live chat and email support, HD video, and fast speeds up to 1 Gbps and additional features (Spam Blocker, antivirus, password generator). Premium Family subscription has the same parameters as Premium, plus 5 accounts with 5 simultaneous connections for each account, but no additional features (Spam Blocker, anti-virus, password generator.

There is a 45-day money-back guarantee, among other VPNs this is very high, which is pleasing. Let's see how much the plans cost.

You can pay by credit card and PayPal.

HotSpot Shield support service is working 24/7 via online chat, e-mail, but unfortunately not in the free version, which is certainly a minus, because when you need instant solutions for certain issues, there will be no one to help. In the free version, you can contact the support center, though waiting for an answer can be more than 1 day, and sometimes more than 2 days, but there is a knowledge base at the site, a quite informative section with frequently asked questions, installation guides and app settings. About the staff support, I can only say in a positive way, I had a problem, because of negligence in the registration, I indicated a wrong e-mail, I sent a screenshot through the mail that I attached and I immediately changed my e-mail address, thanks to Clyde for operativity, though this is the second employee who helped, the first I, unfortunately, could not explain what you need to do. In any case, the customer service is tactful, polite and offers prompt and helpful solutions.