In this review we will talk about HideMe VPN, the service is registered in Malaysia, a country where lately things are getting better in terms of freedom of speech and making it attractive to foreign companies. HideMe is a very reliable service with high-level encryption AES 256, also worth mentioning the Hide.me Bolt technology, which is better to use on Windows, because it gives priority to the TCP performance, which makes your speed much faster and at the same time uses the TLC 1.3 protocol through which your internet service provider can not see your history of visiting sites, your actions through the use of AES-GCM and ChaCha-Poly-1305 encryption, so the Internet provider can not restrict your traffic.

HideMe VPN uses a zero-logging policy, which first of all causes trust from users, the ability to connect up to 10 devices simultaneously, split tunneling. The applications support such protocols as OpenVPN, Softether, SSTP, IKEv2, PPTP, L2TP/IPsec. The service is available in 47 countries with 75 VPN servers and is compatible with platforms such as Windows, Linux, iOS, macOS. Android, Chrome, Firefox, Blackberry, Amazon Fire Stick. HideMe VPN also offers a free plan, which of course has restrictions on the features of the service. We will test the speed of VPN connection to different servers, talk more about the functions and based on all of this you can decide for yourself whether this service meets your needs.

HideMe uses high-level encryption by modern standards AES 256, which means you can choose from 6 VPN protocols such as OpenVPN, Softether, SSTP, IKEv2, PPTP, L2TP/IPsec, and depending on your needs you choose the most suitable for you.

It is also worth noting the use of the eighth protocol called Wireguard, which is rapidly gaining popularity and becomes the new standard of security and speed. This protocol is open source, which makes it transparent, using modern algorithms of cryptography to ensure high security and combined with lightning speeds makes it stand out among all the others. Good news for Windows users, HideMe has developed hide.me VPN Bolt. Here we can highlight several advantages of this technology:

2) Using TLC 1.3 protocol to prevent your ISP from restricting traffic

IPv6 Leakage Protection, an added feature to ensure your anonymity and privacy on the network, means with IPv6 leakage protection in VPN connection the traffic is disabled so that the ISP and the third parties will not be able to track your web browsing activity.  Thanks to the provided arsenal of features, we can not doubt the reliability of the service and the security of our digital identity. 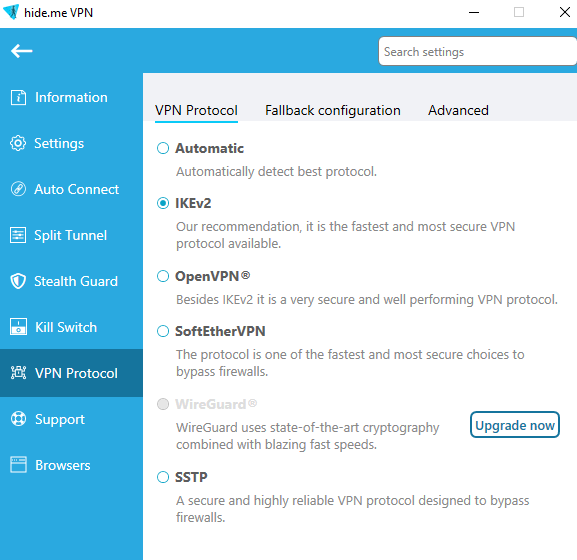 HideMe VPN is registered in Malaysia. This country allows VPNs, the jurisdiction of Malaysia is not the most favorable country for VPNs because since 2018 to avoid media fake news, the government of the country passed a law on partial censorship not to spread fake news, however, with freedom of speech and access to the net things are improving. But it is worth adding the country's constitution does not guarantee the right to privacy, government agencies by law can get information on suspected Internet users and if the VPN server, then a country like Malaysia will not be the best choice. Fortunately, HideMe VPN has a zero-logging policy, so if the legal authorities have enough evidence for the VPN service to give them data about Internet users, here HideMeVPN simply will have nothing to show them, because your actions are not tracked and not stored on the company's servers.

The speed of HideMe VPN is good, first of all, it is worth noting the technology HideMe Bolt, through which you are provided with maximum speed on Windows securely encrypting your online traffic, and your Internet service providers can not limit your traffic. It is also worth noting the excellent bandwidth servers, so you can enjoy video content streaming platforms without buffering in Full HD. But do not forget about the factors that affect the speed of the VPN connection, namely the geographical location of the server (the closer the server, the faster will be the speed of your connection), the protocol you use when connecting, the bandwidth, and your speed, which gives you your Internet service provider. We will test servers without a VPN connection, to the closest and then the most remote, in our case, it is the U.S.

Now we will look at the additional features that HideMe VPN offers:

The function of split tunneling - it allows you to use at the same time a virtual private network VPN for anonymous data transfer, and use the public network if the situation does not require encryption of your data, because it is not always necessary and may even cause questions to the bank if your IP address is in another country at the moment, so this feature is a good addition.

Another feature in offered functions is cascaded GNP, where you choose an input and output server and tunneling takes place through several locations of GNP servers, thereby creating a reliable and secure connection.

Kill Switch function - acts as an emergency switch, if you have a failure in your VPN connection, this function automatically terminates the Internet connection thereby protecting you from your data leakage.

You shouldn't have any problem installing it on different platforms, but if you do have any problem you can find installation guides on the website or you can get help from the support team. Once you've paid for your subscription or chosen a free plan, all you have to do is create an account and follow the simple instructions. 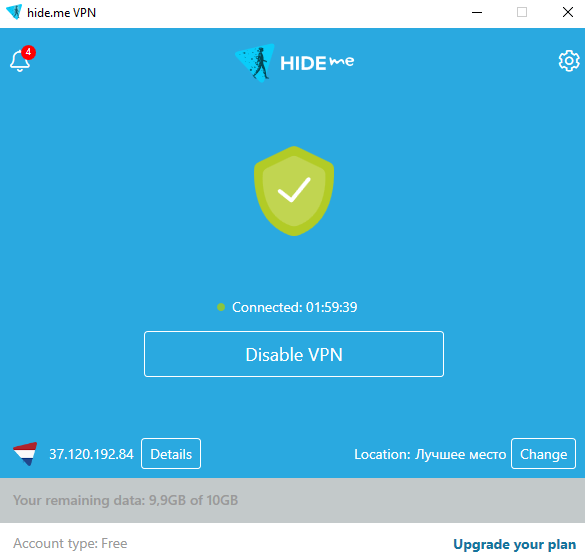 HideMe VPN servers are located in 47 countries and a fairly large network of 75 VPN servers. Servers are well optimized, there are no connection speed limitations, servers are present on 6 continents in 3 regions: Europe, America and Asia-Pacific.

HideMe VPN proved to be good at bypassing geo-blocking and opening access to such famous streaming platforms as Amazon Video, Hulu, Disney+, and many others, although there are disputes about unblocking access to Netflix. I succeeded and the American library of Netflix video content was available to me. Also in countries with censorship (China, Iran, Saudi Arabia, UAE) like to track your actions in popular messengers and your video viewing history from popular platforms such as YouTube, HideMe perfectly copes with unblocking access in these countries, masks your IP, so you can continue surfing sites, watching videos online anonymously and without restrictions. The situation with download torrents is a little worse, not all servers support P2P traffic, but in general, the picture for streaming and torrenting is favorable.

HideMe VPN is compatible with operating systems Windows, Linux, macOS, Android, iOS, and also has extensions for browsers Chrome, Firefox, Edge, plus the service offers us an application for Amazon FireTV Stick and VPN router, it is needed to create a VPN environment, so you can use all devices through a single connection, is its firmware on the VPN router, it is worth saying at once that not all routers are suitable for this purpose, it must be compatible with the firmware WRT, you can buy an already configured router from HideMe, or if you have your VPN router, the site has configuration guides with firmware OpenWRT, DD-WRT, Tomato.

To start using the application from HideMe, you just need to create an account, download the appropriate application for you and just start using, everything is simple, but if you suddenly have any questions, the site has a section with installation instructions or you can contact support.

HideMe belongs to the category of free VPN, but accordingly, if you encounter a number of restrictions, you will only be able to connect to 5 locations, the amount of data used will not exceed 10 GB, you will not be available protocol Wireguard, data transfer rate will be much lower, now let's look at plans without restrictions

You can pay by credit card, PayPal, cryptocurrency, and if you for some reason want to stop using the service WAPN, the service has a 30-day money-back guarantee.

Support service HideMe VPN is working 24/7, you can contact the support staff via online chat, as well you can ask your question to their email, the answer from the staff is usually not going to make you wait long. The site has a blog where you can find the answer to your question in the discussion threads of other users or ask it yourself, as there is a section with frequently asked questions and guidelines for installing applications and configuring VPN routers with different firmware plus all that is an open knowledge base, if you want to learn aspects of VPN. All these options show that the service cares about its users.