We will talk about a world-renowned company that specializes in anti-virus software, a German company founded in 1986 by Tjark Auerbach under the name H+BEDV Daten Technik, later Avira. The company offers many products for digital security and has won many awards from the AV Comparative, an independent laboratory dedicated to testing antivirus software. Avira has won gold and silver awards for its performance, as well as for file detection and malware removal. We won't look at all the products the company offers but focus on a separate one and that is the Avira Phantom VPN.

We will consider the advantages and disadvantages of the service and conduct a series of tests in various areas. To begin with, brief information about the service: the service claims to have no logs, we will talk about this in detail later and find out if this is in fact the case. Avira Phantom VPN uses strong military-grade encryption, meeting today's high standards of data protection, uses Open VPN protocols for Windows and Android applications, L2TP/IPSec for iOS and macOS applications. An unlimited number of devices can be connected at the same time. There is a free version, which implies a number of restrictions and a paid Pro version,

30-day money-back guarantee, built-in protection against DNS leakage and also does a good job of opening access to streaming sites like HBO GO, Hulu+, Amazon Instant Video, Facebook, Youtube. Let's break down all aspects of the service in more detail and each of you can decide at the end whether the service meets your needs.

One of the key points when evaluating a VPN is the Privacy and Security that the service provides. I did not like the fact that the website says almost nothing about the technical aspects in the work of the VPN, I had to find out everything from Avira's technical department and look for information in other sources and this is what we were able to find out. The service uses military-grade encryption, without which it is difficult to imagine a reliable VPN today - AES 256.

Avira implements a secure transmission of data through an encrypted tunnel using the protocols Open VPN and L2TP/IPSec, to be honest, the choice is small compared to other VPNs and attention, the Open VPN protocol is used for Windows, Android applications, and L2TP/IPSec protocol is used for iOS and macOS applications, which further limits our options. But even with such a small choice of technical parameters, the service provides confidential data transfer and ensures the anonymity of your digital identity on the Internet, especially in public Wifi networks, when your data becomes vulnerable, which can be used by cybercriminals.

The service also provides already built-in protection against DNS leakage, we have conducted several tests on leakage of DNS requests, IPv4, IPv6, and Web RTC. During the tests, I found no leaks on all 4 points, leaking confidential information and the application reliably masked my real IP address. 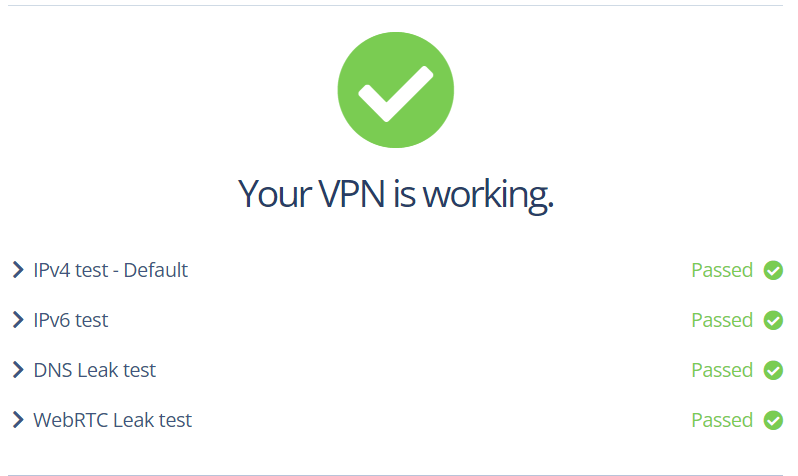 Avira Phantom VPN is registered in Germany, but not everything is so straightforward, US and Canadian users will be subject to US jurisdiction as NortonLifeLock Inc. bought Avira in 2020. The U.S. as we know is a member of the Five Eyes Alliance, which actively exchanges intelligence with other members of the alliance, and thanks to the disclosed evidence of Edward Snowden, the U.S. having the most advanced surveillance system at its disposal, uses it not only as a terrorist detection, but massively monitors the online activity of its citizens and not only, which makes the country a bad choice for the registration of the VPN.

Users who live outside the U.S. and Canada are also not in the best position, because in this case, the jurisdiction is subject to the law of Germany, which is part of the 14 eyes alliance, although Germany shows active support for free access to the network, a number of laws have been passed that worsened this situation with regard to the privacy of citizens, now the government can monitor the online activity of citizens, even if the user is not a suspect. But if the service has a zero-logging policy, so the government will have nothing to provide, but it's not so simple, after studying the privacy policy, there are a couple of interesting points, which states that the service collects information about email addresses, ID number, IP address, location, content, language settings, some geographical information based on location in the GPS / Wi-Fi, although Avira says that these data will be used for diagnostic purposes, this is still a big drawback. Also, the good news is that in the app you can disable the collection of information with a single click.

Now it's worth noting the positives, Canary Witness, the company provides a transparency report every year in the public domain, for 2018 there were 13 requests for user information and 10 requests in 2019, the report says that the company has not granted any requests, which brings back our faith in providing the previously stated privacy.

To test the speed I used the independent site Speedtest, this is also an important point, because if when using a VPN speed is reduced to a minimum, the point of using a VPN is lost, because it becomes impossible to surf the Internet. To begin with, I measured the speed without a VPN connection and it was 38.32 Mbps, then I connected to a nearby location and my speed was 26.21 Mbps, which means my speed dropped by 30%, this is a good indicator when using a VPN, but also I decided to check if I could connect to a server from the U.S. (Distance about 10000 km), what would be the speed of this. Avira showed a good result and after the test my speed was 7.46 Mbps, compared to other WAPNs it is noticeably different, but it was good enough for me to watch video content without buffering. Many factors affect the speed, such as geographical location, the encryption you use, the server network of the service and your own speed, you should take into account all these factors when testing the speed of the VPN.

Unfortunately, the service does not have much functionality of additional features, but among them, there is one of the most useful functions, killswitch, which shuts down your Internet traffic when the connection to the VPN is broken, this option prevents you from information leakage, because at this moment, especially when you are connected to public networks, your data becomes most vulnerable, which can be used by cybercriminals, but killswitch function is available only in the paid version. You will also have the option to block malicious sites and their content, making your surfing on the Internet safer, we have already noted in file detection and malware removal, Avira has a leading position among antivirus software.

The Avira application is perfectly optimized, it is quite easy to use, there is autoloading at system startup, you can also choose a light or dark theme, you can change this option in the screen settings and I advise you to disable data collection for diagnostics, as this feature is enabled by default. In the free version, you will have one virtual location in the Netherlands, as the other servers are only available in the paid version and I did not like that the app does not write the country, but just "the nearest virtual location". 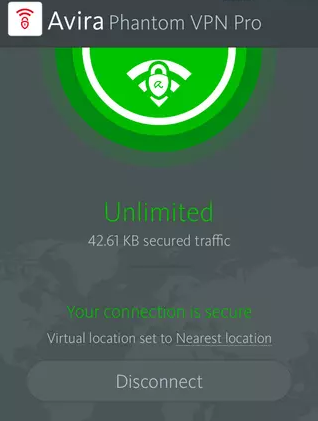 Avira Phantom VPN does not have a huge server network compared to other premium VPNs, but it has 46 VPN servers distributed worldwide in 38 countries. You will have 2 servers available in Australia, the US has the most - 13 servers, the UK has 2 servers and the rest of the countries have one server each. The server network distributes the load evenly among its users and is well optimized, due to which I have always had acceptable stable speeds.

Streaming services limit their content in different regions and here comes to the aid of VPN, which can bypass the firewall streaming services and give you access to the content you want to watch without regard to geographical restrictions, but the VPN is not always able to open access to services and when the streaming sites find the VPN traffic, they immediately block your access. I had no problem bypassing geo-blocking with Avira to such streaming sites as HBO GO, Amazon Instant Video, Hulu Plus, Youtube, Facebook, BBC iPlayer, but unfortunately, I could not access Netflix.

I would not consider Avira VPN for torrenting, as we mentioned that Avira collects more data than you want, while you will like this VPN service not to collect any data at all, considering the ambiguous jurisdiction of 2 countries, it does not give you an absolute guarantee when downloading torrents, You will not be fully anonymous, and if you also live in strictly censored countries, where laws prohibit torrent downloading and you may even face imprisonment, these facts put you at risk, so be careful.

Unfortunately, Avira Phantom VPN only has apps for Windows, macOS, Android and iOS, not even extensions for browsers, but this situation will undoubtedly be rectified in the future. You can connect an unlimited number of devices at the same time, but in the paid version, in the free version you will be able to have one connection.

Client for Windows is intuitive, easy to use, with a nice user interface, the application is stable, but long establishes a VPN connection to the server, in the settings you can change the options you want, even change the color theme, which will thank your eyes at night. The difference from macOS and iOS clients is the use of the protocol, iOS uses L2TP/IPSec instead of Open VPN. When downloading and installing the client should not have any problems even a beginner, in a pinch there are guides on the site or a section with frequently asked questions, where you can find a solution for your problem.

As we already know, there is a free version, which has a number of limitations, 1 GB of traffic per month, connection of one device at a time, no killswitch function, one virtual location, the paid version has three rate plans, a 30-day money-back guarantee, which is enough time to test the service, an unlimited number of simultaneously connected devices, killswitch function and unlimited traffic. Let's look at three Pro plans

You can pay for your subscription with credit cards, PayPal, and SEPA. 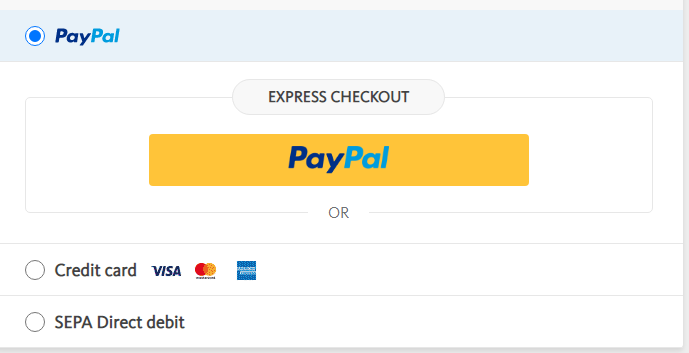 With the service support, you can only contact via e-mail or ticket system, unfortunately, the live chat will not be available to you, which is a disadvantage, as there are questions or problems that require immediate solutions. Support is available year-round, 7 days a week, but you have to wait a very long time for an answer. The website is well designed, but as I said not enough information about the product itself, everything is laid out in general terms without any specifics, there is a section with frequently asked questions where you can find an answer to your question. All things considered, the support service is not up to the premium service, given the shortcomings, but if you manage them, this product has a lot of potentials.