Today we have on our radar a relatively young VPN provider, which started its activities in 2019 and has already gained the trust of 6 million users, we will talk about Atlas VPN, which since 2021 belongs to Nord Security, which owns products Nord VPN, NordPass, NordLayer, NordLocker, and NordWL and has successfully implemented itself in cybersecurity for many users.

Atlas VPN is based in the U.S., which is not the best choice for registering a VPN, given the jurisdiction of the country, the service maintains a zero-logging policy, as stated on the website, but still some information the service retains, what exactly, we will analyze in detail in the Logging policy and Jurisdiction. Security and confidentiality Atlas VPN at a high level due to the AES 256 encryption, without which it is difficult to imagine today a reliable VPN. Unfortunately, the choice of protocols is not great in comparison with other services, Atlas VPN offers IPSec/IKEv2 and Wireguard protocols to encrypt the transmission of your data, there is a useful function killswitch to prevent data leaks, also protection from IPv6 leaks. There is a free version in which you will have access to 3 virtual locations and up to 10 GB of free traffic per month. At the same time you can connect an unlimited number of devices, which is a big advantage of the service, high quality 4K video playback, P2P support, as well as ad blocker, trackers, and malware.

Although the service is relatively young on the VPN market, it can already be a huge competitor due to its features and additional security features, we will consider all the disadvantages and advantages of the service, we will test Atlas VPN for data leakage and measure the speed, based on the information provided you can decide for yourself whether this service suits you or not considering the price to quality ratio.

Atlas VPN has taken the issue of security and privacy of its users seriously. The service uses the most reliable AES 256 encryption at the moment, message authentication is performed using SHA 384 algorithms, as well as BLACK2s algorithms for hashing, these parameters indicate the high-security standards the service provides its users with. Among the protocols, the choice is not great compared to other VPNs, in the settings you will see two protocols: IPSec/IKEv2 and Wireguard. Unfortunately, it will not be available Open VPN, which many VPN users are used to, but the available protocols also cope well with their tasks, and many even consider Wireguard as the new gold standard in cybersecurity due to its open-source, high performance, ease of use and modern cryptographic algorithms. 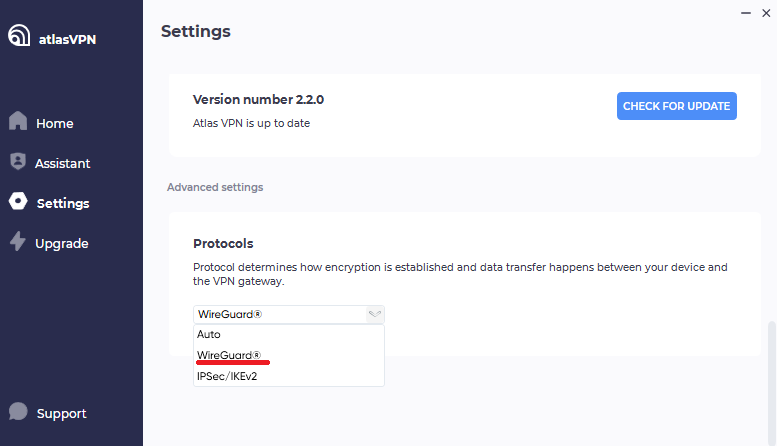 Atlas VPN is registered in the USA, which is a member of the Five Eyes Alliance, whose members actively exchange intelligence and not only, also the USA is known for mass online surveillance of its citizens and even considering the active support of free access to the web, freedom of rights and the right to privacy, still makes the USA the worst choice for registration of a VPN.

The service initially claims to have a zero-logging policy. Yes, browsing history, IP address when you connect, connection time is not stored and recorded on Atlas VPN servers, but still, for diagnostic purposes, the service collects some information such as device type, model, brand (eg, Samsung, Apple), OS version, device ID, language, time zone, approximate location, which is certainly a drawback, since the zero policy means no logs at all, and the amount of data the service collects is quite large. Now I will tell you what I undoubtedly like, it is a transparent policy that the service conducts, on the website you can find the Order Canary, where the service exposes the number of orders received from the government or other structures to request information about the online activity of users, and such requests have not yet been received, in any case, it shows that Atlas VPN is honest with its users and it has nothing to hide.

Another advantage and credit to the credibility is the passing of an independent audit by a cybersecurity company called VerSprite, the company tested the iOS app and during the testing, it identified 5 threats, but not above average, that affect the server service and the iOS app itself. Atlas VPN is quite results and is not going to stop there, but to eliminate the shortcomings that the audit revealed, this again shows the transparency of the company and the desire to develop.

Speed testing is also an important point when evaluating VPN, it depends on several factors, the physical location, the closer the server, the faster will be your speed, the server network of the service, the more servers, the less will be the load on them, as well as the bandwidth and encryption that the service implements.

Now let's talk about the additional features the service can provide. First of all, of course, it is a useful function of additional security killswitch, which disconnects you from the Internet when you have a connection failure in the VPN application, at this point when the application has a connection failure, your data becomes vulnerable and there is a serious risk of leakage of your data, especially this is used by cyber criminals, when you are connected to public networks, killswitch function immediately disables your Internet access, thereby preventing the risk of leakage of your confidential information.

SafeSwap servers, their architecture is designed in such a way that connection to the server is made from several IP-addresses simultaneously, making you almost invulnerable to online surveillance, this feature further increases your safety and anonymity on the Internet.

I also liked that Atlas VPN has an ad blocker, malware and trackers, prematurely blocking your access to suspicious sites, preventing the threat.

Consider the Data Breach Monitor feature - it monitors your data leakage with its own updated database and informs you if it finds a breach of confidential information, yes, the feature is useful, but it requires collecting little of your information in return. you have to provide your email address, and I as a user want to stay as anonymous as possible. but the feature is really useful and it works. 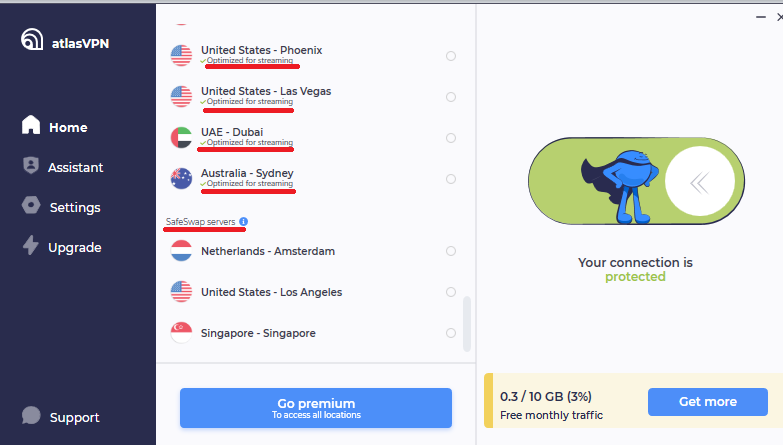 Atlas VPN's server network is not as massive as that of premium VPN providers, but the servers are located all over the world and are characterized by stable operation and high performance. Atlas VPN has 37 VPN servers/locations in 31 countries.

How good is Atlas VPN for streaming and torrenting? Streaming sites, as we know, limit their content in different regions according to geographical principles and of course, such restrictions are not liked by many users who want to enjoy content in full. If you are considering Atlas VPN for streaming, I have good news for you, for a start, I tried to connect through a server from Los Angeles to the American library Netflix and the service successfully bypassed geo-blocks and gave me access to the site without restrictions, then I also tried to enter the sites HBO Max, BBC iPlayer, Disney+, Amazon Prime Video and also got access without geographical restrictions. I watched the video content without buffering, in high quality, who appreciates high quality, you will have access to streaming video in 4K. Answering the question of whether the service is suitable for streaming, unequivocally yes, due to opening access to many streaming services and providing high quality when watching. All servers are optimized for streaming. There is support for P2P networks, but for torrents, I would not call Atlas VPN the best option, as the service saves some logs for diagnostic purposes, which exposes your digital identity to risks when downloading torrents in countries with strict censorship, where torrent downloading is prohibited and punishable by law.

Atlas VPN provides applications for Windows, Android, macOS, and iOS operating systems. The applications have little difference in functionality between themselves, any application is simple to download and easy to install, everything is already configured for you, you can change the security settings in the application itself, choose between the protocol IKEv2/IPSec and Wireguard, also in all applications will be available function killswitch, even in the free version, the service has done a great job on applications, all works stable, all is intuitive, even for beginners. Ad-blocker will work only in the paid version, you can enable the auto-start the application when you connect to the Internet. also in the settings, you can turn off the function of collecting some of your data for analytics. Unfortunately, extensions for browsers and routers are not available, but against the high performance of the available applications, this drawback is insignificant.

The price policy, given the potential that the service realizes, can compete with premium services unambiguously. The free version is available, the functionality is limited, including the limit of the provided traffic, per month Atlas VPN gives 10 Gb of traffic, which is a high figure compared to other free VPNs. Let's look at 3 paid plans:

30-days money-back guarantee is available, this is enough time for testing the service and if for some reason you decide it's not right for you, you can easily get your money back.

You can pay for your subscription using credit cards, PayPal, or Google Pay.

Support service is working 24/7 all year round, you can contact the service via e-mail and unfortunately, this is the only way, because there is no live chat, this type of service is useful because you can immediately get an answer to your question, but when I contacted support I was impressed by the speed of response, Atlas VPN employee answered me after 2 hours, after I asked him if the service will work for me if I am in China, unfortunately, the answer was negative. You can also get a better idea of how the service works by going to the blog or the FAQ section of the website. In general, the support service does not reach the premium level, but only because of the lack of live chat, otherwise, everything is well organized, the employees are polite, tactful, answer specific questions and most importantly, they answer quickly.