ZenMate is a German VPN provider with a large army of users, their number reaches 47 million, a reliable VPN with optimized servers for streaming and torrenting, low functionality, and high credibility among users due to zero-logging policy, powerful encryption algorithms, and ease of use. ZenMate as well as ExpressVPN, Private Internet Access, CyberGhost belongs to the English company Kepa Technologies, which earlier (before the acquisition of CyberGhost) was engaged in advertising software and their integration into various mobile applications, then the company changed its core business and started dealing with digital privacy, immediately, of course, the company was not trusted in the digital world, where users value privacy above all, but later proved its commitment to its new business and began to gain confidence among users and the WAPN giants, which

Service does not have a large arsenal of features, but for some users, it will be unnecessary, ZenMate uses strong encryption AES 256, considered the most secure to date, the protocols OpenVPN, IKEv2, L2TP/IPSec, Wireguard. Among the additional security features, the service uses IPv6 leak protection, DNS, killswitch emergency switch.

The applications are well designed for each operating system and browser, especially suitable for those who are just starting to use VPN.

In this review we will test the service for data leaks, measure server streaming speeds, and give detailed information about the service that will help you determine whether this VPN provider is suitable for you.

As for the security and privacy of its users' personal information, ZenMate has approached this issue with great responsibility and seriousness.  The service uses the strongest AES 256 encryption available today, this encryption is used by states, banks, and other government agencies where the "top secret" mark is used. The hash authentication uses SHA 256 and the handshake is performed using RSA keys with 4096 bits length. As for protocols, ZenMate for Windows and macOS uses OpenVPN, IKEv2, and L2TP/IPSec protocols, but you will not find them in the application. For mobile applications, the protocol used is Open VPN and Wireguard, which thanks to the open-source, modern cryptographic algorithms and ease of use have become the new standard for the ideal ratio of fast performance and security. Unfortunately, this protocol is not used in Windows, macOS, which disappoints me, as I am used to using this protocol most of the time.

I have tested the service for DNS, WebRTC, IPv4, IPv6 leaks. Except for the IPv6 leak, I did not find other leaks of confidential information, but there is a solution for this problem, in the application you can turn off the IPv6 traffic and again be not vulnerable, but many premium services offer a secure tunnel for IPv6, as many more often use this channel. 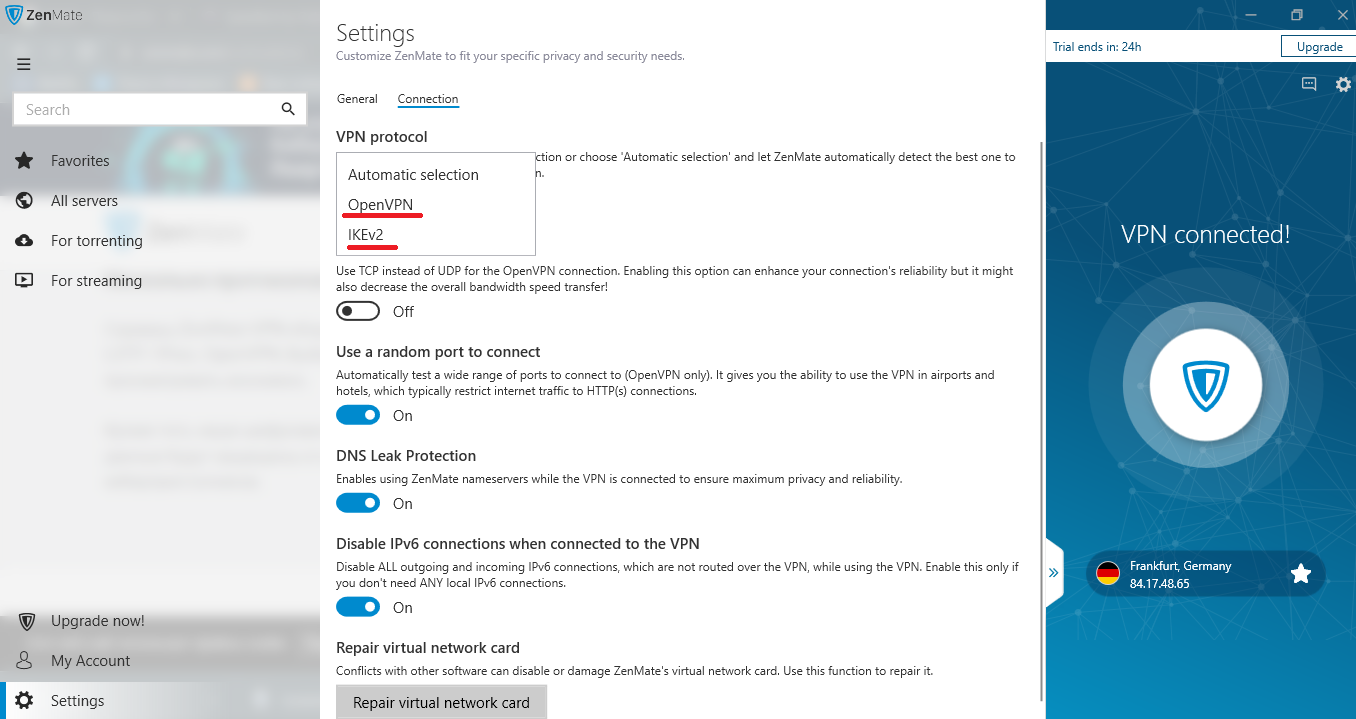 Germany's legal system is not the most favorable for registering a VPN. First of all, the country is a member of the alliance 14 Eye, whose members exchange intelligence, and secondly, in Germany, several laws were passed that require companies to store metadata for a certain period. But it also actively supports the privacy of life and freedom of speech, a controversial jurisdiction is obtained, also the country through several articles that you can find in public sources massively monitors the online activity of its citizens, as well as citizens of other countries. Yes, it is not the best choice, but ZenMate has a zero-logging policy, that is, connection times, history of visiting sites, and other personal information the service does not record and store on its servers, which is a big plus because the service can not help in providing information about its users, even if there is a legal reason.

Another question is raised by the British company Kape Technologies, if only because the UK is a member of the Five Eyes Alliance, but the VPN providers that belong to this firm are subject exclusively to the jurisdiction of the country in which they are registered, and also ZenMate is considered a separate unit and will operate independently of the company to which it belongs.

An important criterion when evaluating a VPN is also the performance of the server. Speed depends on many factors, the server load, the larger the server network, the less load it has, your geographical location, the closer you are to the server, the faster will be your speed, as well as the complexity of the encryption, etc. When testing ZenMate, firstly, I measured my speed without a VPN connection and it was 51.80 Mbps, then I connected to the server from Germany and the speed was 9.57 Mbps, the result was disappointing because my speed decreased by 80%, this is a bad result compared to other VPN, but with this speed, I still managed to watch video content in normal quality and surf the Internet without problems. Next, I connected to the server from Ukraine, because I decided to use the recommendation of the application, the result was slightly better, my speed was 15.80 Mbps. Then I decided to check 2 servers in the U.S. and UK, as I have a subscription to Netflix and BBC iPlayer and it's important for me to be able to watch video content in normal quality on those streaming platforms. The speed in the US was 5.87 Mbps, a normal result considering the US is on the other side of the world from my actual location. The speed in the UK was slightly better at 7.30 Mbps. It's certainly not what I expected, but it's quite possible to watch video content without buffering, though in normal quality, sometimes in good quality.

ZenMate's arsenal of additional features is not great, here you will find a split tunneling, ad blocker, and so on, but killswitch will be available - its role is to disable the connection to the Internet when you have a failure in the Wifi connection, thereby preventing the risk of your data leakage, it is an especially useful feature when you are connected to public Wifi networks, where you become an easy victim for cybercriminals. Unfortunately, this feature will not be available in the mobile app.

in the App Settings you can see a section called "debug virtual NIC", this means that when there is a conflict with other software, the virtual card may fail, this feature will stabilize this card. In public Wifi networks, traffic is often limited to HTTP connections, which limits the work of the VPN connection, here to help comes the function "random port", which eliminates this problem by automatically checking the ports to connect.

The ZenMate team tried very hard when developing the application, the applications for all operating systems are well optimized, with clear even for beginners user interface, it is very convenient and easy to use, there is a separate sorting of servers for streaming, for torrenting, server load and even the distance to it. For example, mobile applications do not have killswitch, but they have the protocol Wireguard, and the operating systems Windows, macOS have killswitch, but no protocol Wireguard. The only thing I didn't like was the fact that it often takes up to 10 seconds to connect to a server, which is quite a long time. In general, I liked the work of the applications. 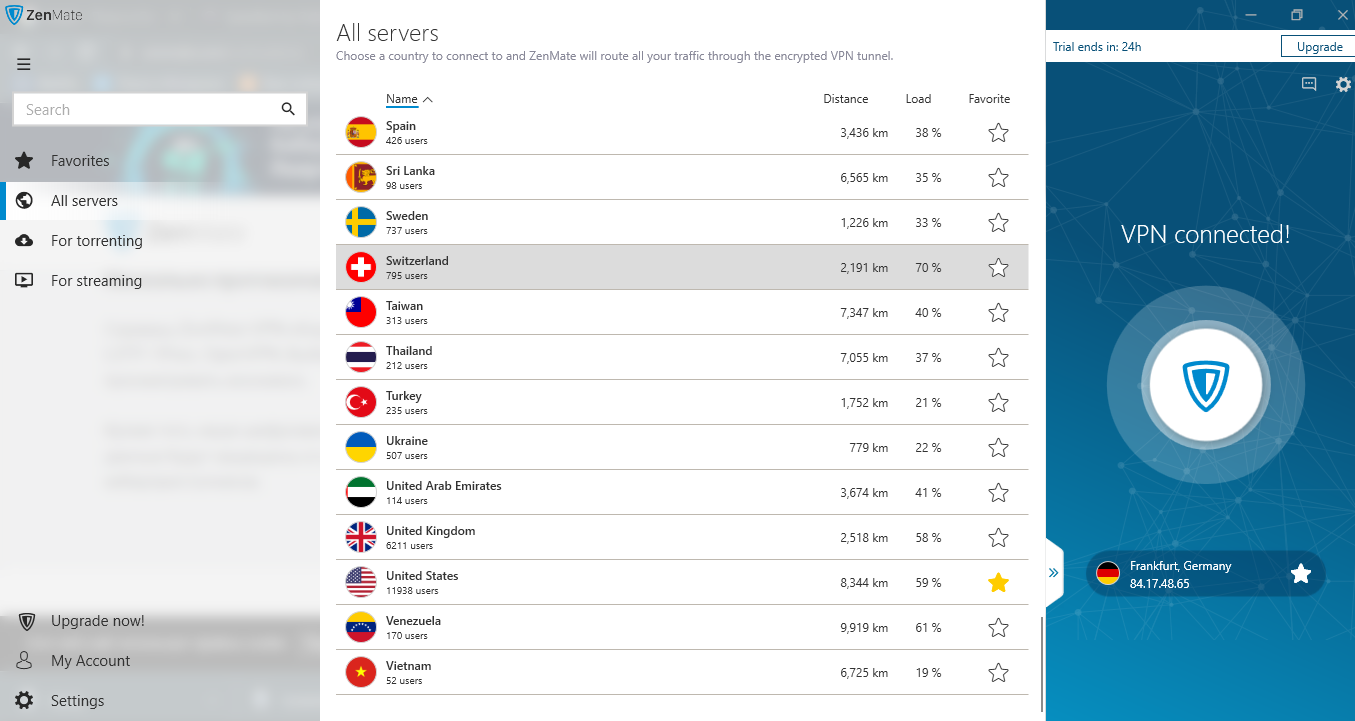 ZenMate has a good server network of 89 VPN locations in 80 countries around the world. There are physical and virtual servers, no P2P support in Albania, Armenia, Estonia, India, Israel and several other countries, but most ZenMate servers support P2P networks. Due to enough server network, the server load is distributed evenly and rarely exceeds the 65 percent server load mark.

How good is ZenMate for streaming and torrenting? Streaming sites publish their content in every country with a number of restrictions and many people are not happy with this situation, but not all VPN services can bypass geographical blockages, but the good news is that ZenMate successfully managed to bypass restrictions and opened access to a lot of such sites, moreover, the service has a section with specially optimized servers for streaming.

For torrenting, ZenMate is also good, considering their privacy policy, this is especially important for citizens of countries with strict censorship. The service has for optimized servers for torrenting, which makes it much easier for users, but the only downside is the speed. On mobile devices when using WIreguard protocol, performance indicators are at a good level, but on Windows and macOS it is not available and the performance decreases markedly, on desktops and PCs,  I would recommend using Open VPN UDP protocol. 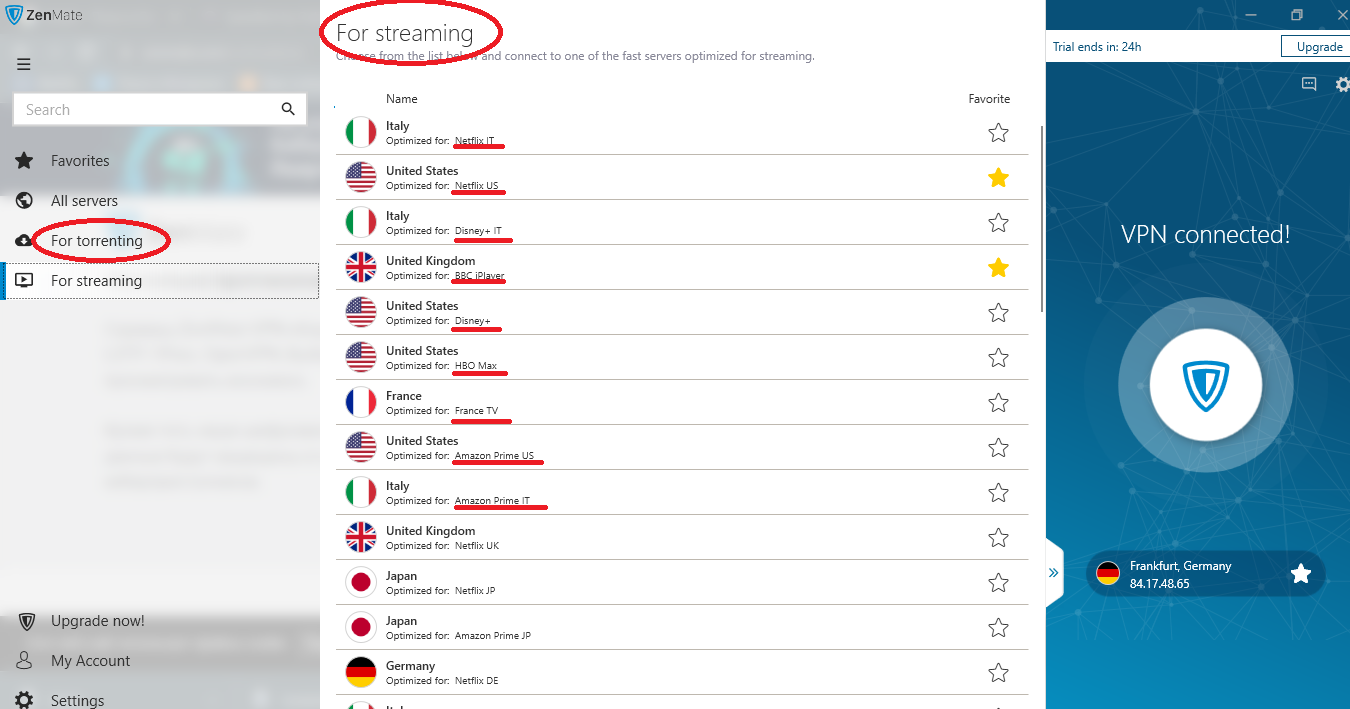 ZenMate uses apps for Windows, macOS, iOS, Android, and extensions for Chrome, Firefox, and Edge browsers. You can connect an unlimited number of devices at the same time, not many VPNs provide such a service, undoubtedly this is an advantage of the service, especially it is suitable for a large family.

The application is well optimized, with high performance, intuitive interface, it is very easy to use, so I would advise newcomers to the VPN to look at this service, given its simplicity, reliability and loyal prices. In the application, in the settings section you can change the protocol, enable killswitch and other additional functions, see the information. about servers, what load, distance, also in the settings servers are conveniently sorted for streaming and torrenting. It is worth noting that the functionality, the mobile applications are slightly different, the Wireguard protocol is only available on mobile applications and the emergency switch is available on the contrary, only in Windows and macOS, this is probably the only difference.

ZenMate has one of the most competitive price plans, considering the ratio of services and pricing. What I liked, there is a 7-day free trial, this time will be enough for you to test the service, but if that is not enough for you, ZenMate provides a 30-day money-back guarantee, if for some reason you are not satisfied with the service. ZenMate offers two pricing plans: for browsers and for all other devices.

ZenMate support is available 24/7, 365 days a year. You can contact the support staff via online chat, email and ticket system. The site is available in 7 languages: English, German, French, Spanish, Russian, Turkish, Chinese, the site is made with convenient navigation, all sections are quite informative, there is also a section with frequently asked questions, where you can find the question you are interested and get a fairly detailed answer, as a rule, the answer does not have to wait long, support service works quickly, tactfully and gives a clear answer to your question.